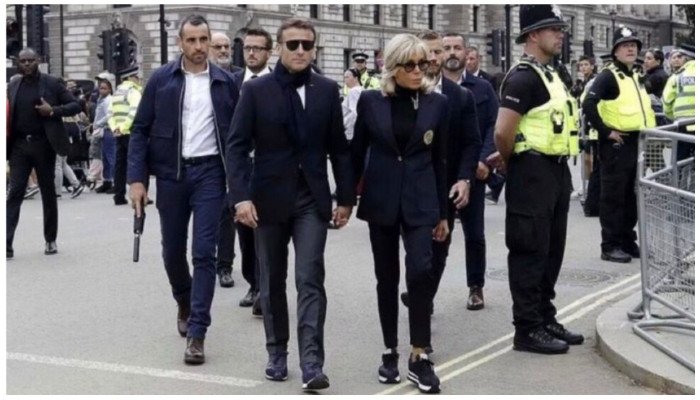 French President Emmanuel Macron‘s choice of footwear during his trip to London ahead of the queen’s funeral caused an outpouring of commentary —  and disinformation — online.

The 44-year-old leader was photographed on Sunday walking in front of Westminster Hall with his wife Brigitte where the late British sovereign was lying in state ahead of her funeral on Monday.

Instead of his usual suit and formal black leather shoes, Macron was pictured looking unusually casual, wearing a pair of sunglasses and — to the shock of some observers —  navy blue trainers.

Spurred on by critical comments online, French talk show radio channel RMC hosted a debate on Monday on whether the sight of streetwear on the president on such an occasion was “shocking”, with presenter Estelle Denis insisting there was “a dress code to respect”.

Le Figaro newspaper called them the “trainers of discord”.

Other media outlets sought to correct a growing narrative on social media, fanned by far-right politicians and critics of the president, that Macron had worn trainers for the queen’s funeral, which took place on Monday.

“No, Emmanuel and Brigitte Macron did not pay their respects to the queen in trainers,” said an article from the national TF1 channel.

By the time the French leader and his wife paid their respects in front of the coffin on Sunday, both had changed into more formal wear, with Macron in a black suit and black tie.

The couple wore similarly formal wear for the state funeral at Westminster Abbey where they arrived in a bus along with other leaders.

The photos did draw attention to Macron’s expensive taste, however — a potential liability for a man derided as the “president of the rich” by critics and after a summer in which he was pictured using a jet-ski on his holidays.

The trainers in question are made by luxury French fashion brand J M Weston, according to Le Figaro, and sell for 570 euros ($570) a pair.