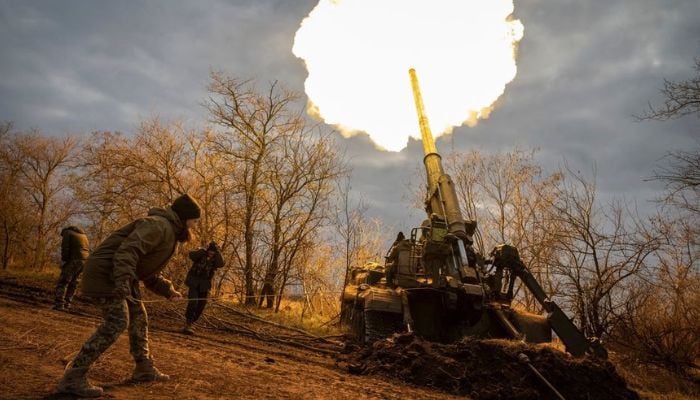 KYIV/FRONTLINE NORTH OF KHERSON: Ukrainian troops have reclaimed dozens of landmine-littered settlements abandoned by Russian forces in southern Ukraine, officials said, the day after Moscow announced its withdrawal from the strategic capital city of Kherson province.

There were indications on Thursday night that Ukrainian forces were getting closer to the city of Kherson, a port at the mouth of the Dnipro River, said a Ukrainian military analyst and a media commentator.

It would take a minimum of one week for Russia to pull out of Kherson city, Ukraine’s Defence Minister Oleksii Reznikov told Reuters in an interview on Thursday. Russia still had 40,000 troops in the region and intelligence showed its forces remained in and around the city, Reznikov said.

Russia announced on Wednesday it would withdraw from the west bank of the Dnipro that includes Kherson, the only regional capital Moscow has captured since invading Ukraine in February.

A withdrawal would be the third time the smaller Ukrainian military has pushed back the Russians, who were thwarted in the north in March from taking the capital Kyiv. Then in September, Ukrainian troops ousted Russian occupying forces from the northeastern region of Kharkiv.

Kherson province is one of four that Russian President Vladimir Putin claimed to have annexed in late September and that most countries condemned as illegal.

US President Joe Biden welcomed news of the Russian withdrawal on Wednesday, but on Thursday played down any suggestion of a near-term resolution to the war.

“I don’t think the conflict will be resolved… until Putin gets out of Ukraine,” Biden told reporters at the White House.

The city of Kherson was within range of Ukrainian artillery and the closest Ukrainian reconnaissance patrols were less than 18 km (11 miles) from the city, Ukrainian military analyst Yuri Butusov said on the Telegram messaging app.

“Ukrainian forces are trying to break into Kherson on the shoulders of the retreating enemy,” he said. “In the area of the river crossings, where Russian troops are concentrated, firefights are breaking out.”

Reuters was not able to verify battlefield reports.

Ukrainian forces have liberated 41 settlements as they advanced through the south, President Volodymyr Zelenskiy said in his Thursday evening video address.

Sappers and pyrotechnicians were going into areas retaken from Russian forces to rid them of thousands of unexploded landmines and ordnance they left behind, he said.

About 170,000 square kilometres (66,000 square miles) remained to be de-mined, Zelenskiy said, including in places where there was still fighting and “where the enemy will add landmines before its withdrawal, as is the case now with Kherson.”

The region’s Ukrainian-appointed governor, Yaroslav Yanushevych, said on Telegram that Russian troops had “taken away public equipment, damaged power lines and wanted to leave a trap behind them”.

Mykhailo Podolyak, an adviser to Zelenskiy, said Russia wanted to turn Kherson into a “city of death”, mining everything from apartments to sewers and planning to shell the city from the other side of the river.

“There are absolutely no signs that a trap is being laid in Kherson,” Volodymyr Molchanov, a commentator from Kherson, was quoted as saying on the Ukrainian national Espreso TV website. “Russian troops started moving out yesterday (Wednesday) … in trying to cross the Dnipro, the enemy is sustaining huge casualties.”

A pullout in Kherson would free up forces from both sides to fight elsewhere, military analysts said, and there was no sign Moscow was finished with what it calls “a special military operation” against its pro-Western neighbour.

“It’s definitely a turning point, but it doesn’t mean that Russia has lost or that Ukraine has won,” said Ben Barry, a senior fellow for land warfare at the International Institute for Strategic Studies in London.

Russia was still capable of a new offensive or counterattacks, he said. “It is far too soon to write them off.”

A small group of Ukrainian soldiers was shown on Ukraine’s state TV being greeted by joyous residents in the centre of the village of Snihurivka, around 55 km (35 miles) north of Kherson city, with a Ukrainian flag fluttering above the square behind them. Reuters verified the location of the video.

A few kilometres away, in a devastated frontline village reached by Reuters in an area already held by Ukrainian forces, the guns had fallen silent for what residents said was the first quiet night since the war began.

“We hope the silence means the Russians are leaving,” said Nadiia Nizarenko, 85. The Russians could be preparing a trap, said Nizarenko’s daughter, Svitlana Lischeniuk, 63.