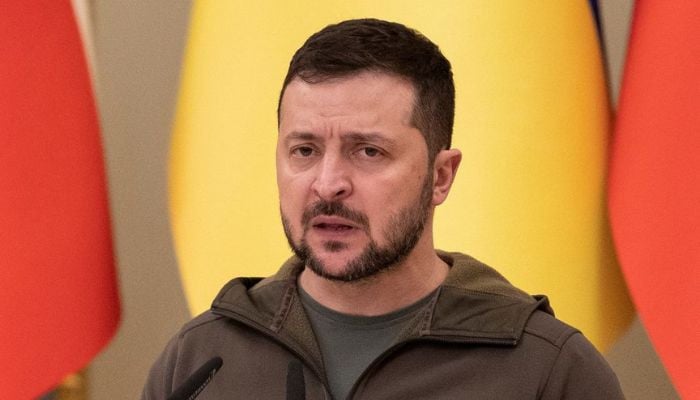 KYIV: President Volodymyr Zelenskiy said his forces would not yield “a single centimetre” in battles for the eastern Ukrainian region of Donetsk while Russian-installed officials said Ukrainian forces were moving into a southern town with tanks. The focal points of the conflict in the industrial region of Donetsk are around the towns of Bakhmut, Soledar and Avdiivka, which have seen the heaviest fighting since Russian forces invaded Ukraine in late February.

“The activity of the occupiers remains at an extremely high level — dozens of attacks every day,” Zelenskiy said in his nightly video address late on Tuesday.

“They are suffering extraordinarily high losses. But the order remains the same — to advance on the administrative boundary of Donetsk region. We will not yield a single centimetre of our land,” he said.

The region is one of four Russia said it annexed in September. Fighting had been going on there between Ukrainian military and Russian proxy forces since 2014, the same year Russia annexed Crimea in the south.

A Russian-installed mayor in the town of Snihurivka, east of the southern city of Mykolaiv, was cited by Russia’s RIA news agency as saying residents had seen tanks and that fierce fighting was going on.

“They got into contact during the day and said there were tanks moving around and, according to their information, heavy fighting on the edge of the town,” the mayor, Yuri Barabashov, said, referring to the residents.

“People saw this equipment moving through the streets in the town centre,” he said.

Kirill Stremousov, deputy head of the Russian-installed administration in the Kherson region, said on the Telegram messaging service that Ukrainian forces had tried to advance on three fronts, including Snihurivka.

Vitaly Kim, the Ukrainian governor of Mykolaiv region, apparently quoting an intercepted conversation between Russian servicemen, suggested that Ukrainian forces had already pushed the Russians out of the area.

“Russian troops are complaining that they have already been thrown out of there,” Kim said in a statement on his Telegram channel.

Reuters was not able to verify the battlefield reports.

There was no official word on the situation in the town from military officials in either Ukraine or Russia.

Ukrainian forces have been on the offensive in recent months while Russia is regrouping to defend areas of Ukraine it still occupies, having called up hundreds of thousands of reservists over the past month.

“These poor mobilised men — really poor, they had had nothing to eat or drink in three days — of course they decided to surrender,” Zhdanov said on his YouTube channel.

Russia’s TASS news agency reported that Ukrainian forces armed with a US-made HIMARS multiple-launch rocket system fired two rockets toward the Luhansk city of Stakhanov, known in Ukrainian as Kadiivka. It said four civilians there had been killed by rocket fire on Sunday night.

Giving an update on the situation in the southern region of Kherson, the Ukrainian military on Tuesday evening accused Russian troops of more looting and destroy infrastructure. A showdown has been looming for weeks in Kherson city, the only regional capital Russia has captured intact since its invasion.

“A convoy of trucks passed over the dam of the Kakhova hydroelectric station loaded with home appliances and building materials,” the military said.

Russian forces were dismantling mobile phone towers and taking equipment, it said, adding that near the city of Beryslav, Russian forces “blew up a power line and took equipment from a solar power station”.

In Kherson city, it said Russian troops removed exhibits, furniture and equipment from a museum devoted to the painter Oleksiy Shovkunenko.

Kherson is one of four partially occupied Ukrainian provinces that Russia says it annexed and it is arguably the most important. It controls both the only land route to the Crimea peninsula and the mouth of the Dnipro, the river that bisects Ukraine.

Zelenskiy also said in his address that about 4 million people were without power in 14 regions plus the capital Kyiv. Scheduled hourly power outages would affect the whole of the country on Wednesday, Ukraine’s electrical grid operator Ukrenergo said.

Russian forces targeted Ukraine’s energy infrastructure with missiles and drones in recent weeks as winter approaches when mean temperatures typically drop to several degrees below zero Celsius (32 Fahrenheit), with lows of minus 20C.

The UN General Assembly is due to vote next week on a draft resolution recognising that Russia must be responsible for reparation in Ukraine for the injury, including any damage, caused by “internationally wrongful acts”. The text has been put forward by Ukraine, Canada, Guatemala and the Netherlands.

Three-quarters of the 193-member General Assembly denounced Russia’s invasion in a vote in March, and in October condemned its self-proclaimed annexation of parts of Ukraine.