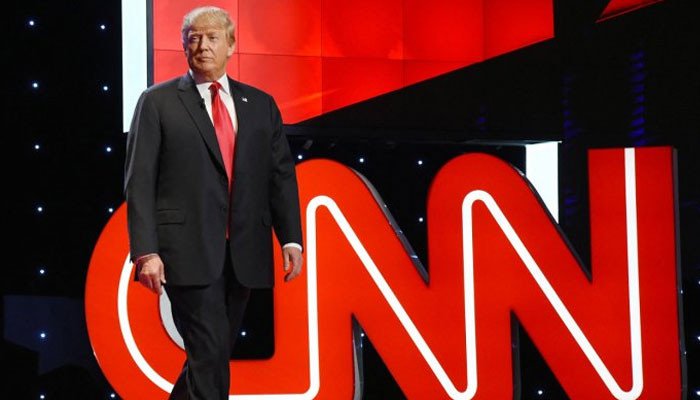 WASHINGTON: Former US president Donald Trump filed a defamation lawsuit against CNN on Monday. He seeks $475 million in punitive damages.

Trump, in the lawsuit filed in a US District Court in Florida, accused CNN of waging a campaign of “libel and slander” against him because it “fears” he will run for president again in 2024.

“CNN has sought to use its massive influence — purportedly as a ´trusted´ news source — to defame the plaintiff in the minds of its viewers and readers for the purpose of defeating him politically,” Trump´s lawyers said in the 29-page complaint.

In a follow-up statement laced with outrage, Trump said Monday that “in the coming weeks and months we will also be filing lawsuits against a large number of other Fake News Media Companies for their lies, defamation, and wrongdoing,” notably regarding coverage of the 2020 election.

The 76-year-old Republican also said his team “may bring appropriate action against” the congressional committee currently investigating the January 6, 2021 attack on the US Capitol by his supporters, saying the panel refused to probe “the massive Presidential Election Fraud” which he insists occurred.

Trump, who requested a jury trial, had a caustic relationship with CNN and other major news outlets like The New York Times during his term, branding them “fake news” and repeatedly raging against them on social media.

The former president, who has hinted repeatedly at another White House run, accused CNN in the lawsuit of involvement in a “concerted effort to tilt the political balance to the Left.”

He said CNN has tried to “taint” him with a “series of ever-more scandalous, false, and defamatory labels of ´racist,´ ´Russian lackey,´ ´insurrectionist,´ and ultimately ´Hitler.´”

In a July statement, Trump had threatened to sue CNN if the network refused to retract allegedly defamatory statements made about him.

The lawsuit contained excerpts from CNN´s response to Trump in which it stood by its reporting and declined to make any retractions.

In Monday´s filing, Trump took particular issue with CNN describing his claims that the 2020 election was “stolen” by Democrat Joe Biden as the “Big Lie.”

“The ´Big Lie´ is a direct reference to a tactic employed by Adolf Hitler and appearing in Hitler´s Mein Kampf,” the complaint said. “The phrase is not taken lightly and is not bandied about blithely.”

The repeated use of the ´Big Lie,´ it added, is a “deliberate effort by CNN to propagate to its audience an association between the plaintiff and one of the most repugnant figures in modern history.”

It said the term the “Big Lie” has been used in reference to Trump more than 7,700 times on CNN since January 2021.

Trump said he filed the suit to “vindicate his reputation as a dedicated public servant and to establish CNN´s liability for the harm it has caused to his reputation by the false, defamatory, and inflammatory mischaracterizations of him.”