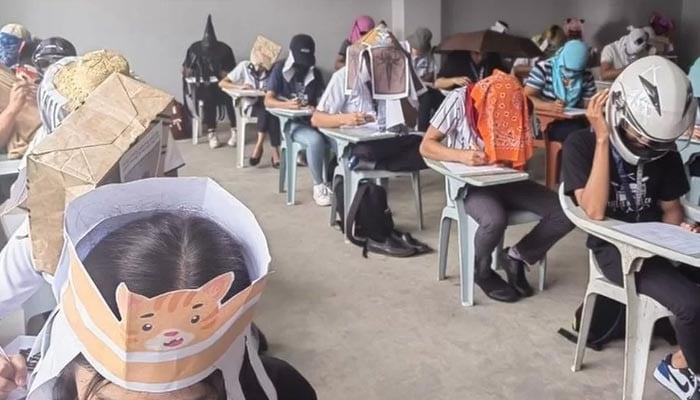 A college in the Philippines asked its students to wear headgear to prevent them from cheating during exams.

Many of the students at Legazpi City responded to this rule by wearing hilarious homemade hats made of cardboard, egg boxes and other materials.

Speaking to BBC, teacher Mary Joy Mandane-Ortiz said that she was looking for a “fun way to ensure integrity and honesty” in the classes.

She said that the idea — implemented during the mid-term exams — had been “really effective”.

The professor said that she had requested her students to make “simple” designs using paper. She got inspiration from an idea used in Thailand some years ago.

However, the students took their creativity to the next level and came up with amazing hats.

One of the students could be seen wearing a hat made from an egg tray in the pictures while others wore helmets, Halloween masks, bandannas, and paper bags.

The teacher posted pictures of her students on Facebook which garnered thousands of likes.

Professor Mandane-Ortiz said that many students finished the test early and none of them was caught cheating.