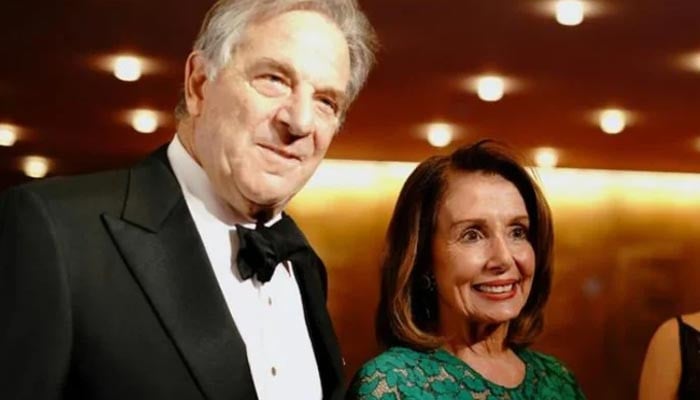 SAN FRANCISCO: The man charged with breaking into US House Speaker Nancy Pelosi’s home and clubbing her husband with a hammer later told police he was on a “suicide mission” and had planned to target more politicians, according to court documents prosecutors filed on Tuesday.

Prosecutors’ motion seeking to keep David Wayne DePape, 42, in pre-trial custody shed new light on his alleged intentions as he pleaded not guilty to the attempted murder of Paul Pelosi, 82, and other state charges.

DePape also was ordered to remain jailed without bond.

DePape showed up for his first court appearance since Friday’s attack with his right arm in a sling, a consequence, his court-appointed public defender said, of a dislocated shoulder sustained when he was arrested.

The attorney, Adam Lipson, told reporters after the hearing that DePape’s legal team would review a number of issues that might factor into his defence, including his “vulnerability” to “political misinformation” and his mental state.

He pointed to the extensive media attention given to the notion, propounded by experts on extremism, that exposure to hate speech trafficked online and amplified by public figures could inspire some mentally unstable individuals to commit acts of political violence.

News coverage of the Pelosi attack has focused on a recent spate of online messages from an individual named “daviddepape” espousing racist, anti-Semitic and anti-LGBTQ sentiments, while embracing the right-wing conspiracy theory known as QAnon.

The attack, which left Paul Pelosi hospitalised, has stoked fears about politically motivated violence a week before midterm elections that will decide control of Congress during one of the most vitriolic and polarised campaign seasons in decades.

Through his attorney, DePape entered a plea of not guilty to all charges, which prosecutors have said could carry a maximum prison sentence of 13 years to life.

DePape stared straight ahead toward a chalkboard at the front of the courtroom during most of the proceedings, which lasted less than 15 minutes.

He spoke little during the hearing, answering “yes” when Judge Diane Northway questioned him about waiving his right to a preliminary hearing in 10 days.

And he shouted out, in unison with his lawyer, the correct pronunciation of his name (de-PAP) when asked by the judge.

Northway ordered DePape to remain in custody without bail for pretrial proceedings, at least until a formal detention hearing is held. But Lipson told a throng of reporters in the courthouse corridor afterwards that his client already remains under federal detention “hold” as well.

The judge also issued a protective order requiring DePape to keep away from the Pelosis and their home and to refrain from trying to communicate with them.

DePape is accused in court documents of forcing his way into the Pelosi home in San Francisco before dawn on Friday with plans to take the speaker of the US House of Representatives hostage, and to break her kneecaps unless she told him the “truth” under his questioning. The 82-year-old speaker herself was away in Washington at the time.

Prosecutors’ newly filed court motion quoted him as tellifng police afterwards he “really didn’t want to hurt” Paul Pelosi, but added, “this was a suicide mission.”

The suspect also listed for police several more prominent federal and state politicians and others he had planned to target, according to the district attorney’s detention motion.

The court filing further detailed Paul Pelosi’s emergency-911 call for help, which prosecutors said the intruder disrupted and then cut short after he caught Pelosi using his cellphone in the bathroom.

Police arrived minutes later, just in time to witness the two men struggling with a hammer before the intruder grabbed the tool away and struck Pelosi over the head, at which point officers rushed in to subdue DePape and arrest him, according to similar accounts contained in state and federal court documents.

The San Francisco district attorney’s court filing added the grim detail that Paul Pelosi was left unresponsive for three minutes and regained consciousness in a pool of his own blood.

The real estate and venture capital executive has since undergone surgery for skull fractures and injuries to his hands and right arm and remained hospitalised on Tuesday.

Police later recovered zip ties in the home, as well as a roll of tape, rope, a second hammer, a pair of gloves and a journal in DePape’s backpack, according to the federal affidavit. Officers said the intruder broke in through a glass door to the residence with the same hammer he is accused of using to strike Paul Pelosi.

The Washington Post on Tuesday reported that surveillance cameras trained on the Pelosi home by US Capitol Police captured the attack in real time, but officers did not notice the images until after local police had already arrived.

Federal prosecutors have charged DePape separately with assault and attempted kidnapping charges punishable by up to 50 years in prison. He was yet to be scheduled for a court appearance in the federal case.

Nancy Pelosi issued a statement late on Monday saying her husband was continuing to make “steady progress on what will be a long recovery process.”