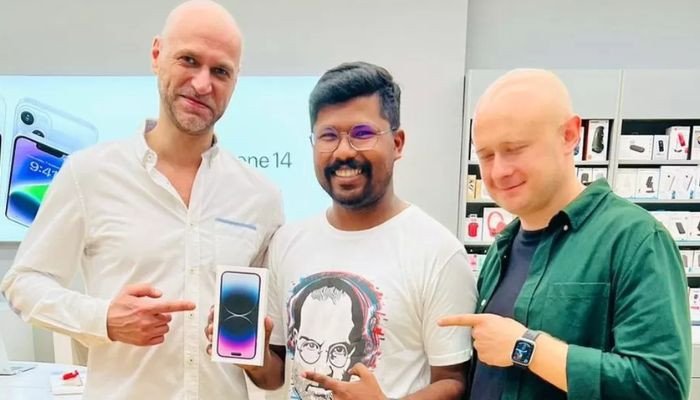 An Indian man who said he’s a big fan of Steve Jobs and Apple journeyed thousands of miles to Dubai for the latest iPhone.

Dheeraj Palliyil flew from India’s Kerala to Dubai just hours before the iPhone 14 Pro went on sale in India. He wanted to be one of the first to buy the latest model, he told the Independent.

The man spent INR40,000 ($500) on the tickets and much more on the smartphone. This shows how passionately the iPhone is sought-after.

This is not Palliyil’s first time, though. He has travelled to Dubai to get the most recent iPhone and stay ahead of others thrice before this.

“I love the excitement of waiting outside an Apple store to be among the first to get the phone,” he said, adding that he did not want to wait long.

And so, he bought his iPhone on Sept 16.

Previously it took up to two weeks for the models to release in India after the sale abroad. Even though this time the launches were just a few hours apart, Palliyil said it had become his “ritual to buy the latest phone in Dubai”.

Palliyil, who is a businessman and a cinematographer said he was always inspired by the late CEO of Apple, Steve Jobs.

He called himself a technology enthusiast who is trying to “commemorate” Jobs’ work.

Palliyil said his family did not support him initially. “They would tease me for wasting money on luxury goods.”

He explained to them that for him it was not just about buying an expensive device. His family now encourages him and alerts him about the latest phone launches.

Palliyil is just one example of how committed people are to iPhones and the lengths they go to in order to own the latest models. Reports of people selling their organs to afford the product and waiting long hours outside stores have now become common.