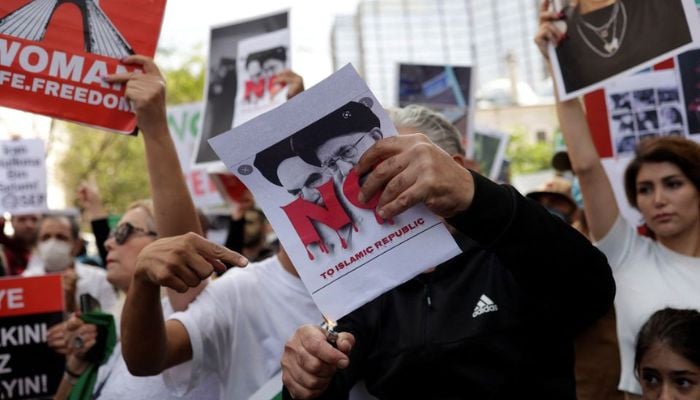 Iran’s rulers have faced the biggest protests in years since Mahsa Amini died last month in the custody of the morality police who enforce the Islamic Republic’s strict dress code.

Following are some of the events since her arrest:

Mahsa Amini, from Iran’s Kurdistan region, is detained by morality police in Tehran, the Iranian capital, for “inappropriate attire”.

Amini dies after falling into a coma. Police say she suffered a heart attack after being taken to a station to be “educated”. Her family deny she had any heart problems. Her father later says she had bruises on her legs, and holds police responsible for her death. President Ebrahim Raisi demands an investigation. Protests begin on social media and in the street.

Protests erupt during Amini’s funeral in Saqez, her home town in Kurdistan. Security forces fire tear gas. Protests spread to the provincial capital. Chants of “death to the dictator” are heard, with some women removing headscarves.

An aide to Supreme Leader Ayatollah Ali Khamenei says he visited Amini’s family to pay condolences and that Khamenei was pained by her death. An official blames terrorist groups for deaths in Kurdistan.

Authorities curb access to Instagram and WhatsApp. Official sources confirm eight deaths in the unrest, including a member of the police and a member of the Basij militia.

The state organises rallies in several cities with marchers calling for protesters to be executed. The army vows to “confront the enemies’ various plots”. State TV says the death toll is 35.

After accusing armed Iranian dissidents of involvement in the unrest, the Revolutionary Guards carry out the first of several attacks on Iranian militant opposition bases in the Kurdish region of northern Iraq.

Security forces clash with demonstrators in dozens of cities. Despite the crackdown, social media from inside Iran continue to show protesters chanting, “Woman, Life, Liberty”, while women wave and burn veils.

State TV says militants fire on a police station in the southeastern city of Zahedan, prompting a shootout. State TV says 19 people are killed. The Guards say four of its forces and the Basij are killed. Amnesty International later says security forces killed 66 people, including children, in the deadliest day since protests started.

In his first comments on the unrest, Khamenei backs the security forces. He says Amini’s death “deeply broke my heart” and calls it a “bitter incident” provoked by Iran’s enemies. Defying his warning, Iranians in several cities chant “We want regime change” and “death to Khamenei”.

Authorities deny reports security forces killed a 16-year-old girl, saying she committed suicide. It is the second time in a week they said a teenage girl died falling from a roof. A coroner’s report denies Amini died from blows to the head and limbs while in custody, linking her death to pre-existing conditions.

Female students chant “get lost” as Raisi visits their university campus in Tehran.

Members of the Basij militia, troops which have been at the forefront of repressing popular unrest for decades, deploy in Kurdish areas where seven people are killed in protests.

A fire breaks out in Tehran’s Evin prison, where many of Iran’s political and dual-national detainees are held, and witnesses report hearing gunfire. The judiciary later says eight people died in the unrest. Sources tell Reuters trouble broke out after riot police began patrols.

Protests break out in the southeast, with demonstrators attacking banks, state media reports.

Iranian riot police deploy in large numbers in Amini’s home town of Saqez, the capital Tehran and the northern cities of Tabriz and Rasht, witnesses say, to mark 40 days since she died. A Tehran refinery official denies workers have staged a strike after videos on social media appear to show one.