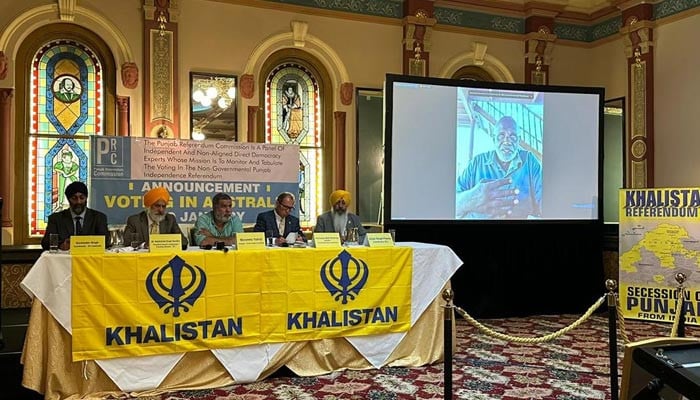 MELBOURNE: The delegate of the Yidindji Nation of aboriginal Australians has expressed solidarity and support for Sikh people’s right to self-determination through Khalistan Referendum

In a well-attended press conference held in downtown Melbourne, the delegate of the Yidindji Nation of aboriginal Australians expressed support for the Khalistan Referendum which will be held here on the 29th of January 2023.

The press conference was called by Punjab Referendum Commission (PRC), the independent body which is supervising the voting in the global Khalistan Referendum, and the secessionist group Sikhs For Justice (SFJ) which is leading the Referendum campaign.

Addressing the press conference, Murrumu Walubara — who serves as the minister for foreign affairs and trade in the Sovereign Yidindji Government — expressed solidarity with Sikhs movement for self-determination and expounded as to “what the United Nations Declaration of Rights on Indigenous Peoples could mean for the Sikh community at an international level”.

“With the Republic of India voluntarily signing up to the UNDRIP, it becomes incumbent upon India to fulfil its obligations of recognising Sikh peoples’ right to self-determination in their historical homeland — the Indian governed Punjab — to settle the past and secure the future,” said Walubara.

Walubara had flown in from the homeland of the Yidindji Nation in Cairns, Australia to address the press conference.

The Yidindji nation, one of the many indigenous people of Australia, is situated in North East Australia. With the Capital City Gimuy, the Yidindji territory is divided up into eight cantons. The Yidindji nation is pre-1770 with a system of authority, land tenure and decision-making, and claims its sovereignty to be uninterrupted.

Walubara and Yadindji leaders are at the forefront of the movement for the rights of indigenous Australians for which a referendum is likely to be held in July 2023 which will grant further rights to aboriginals. Currently, Yidindji Nation has sovereign relations with many nations around the world with its own passport and currency.

Punjab Referendum Commission Member Professor Matt Qvortrup announced that previously declared January 26 Voting in Punjab will be rescheduled to a later date owing to the ground situation in which hard-line Bhartiya Janata Party (BJP) Narendra Modi-led government is cracking down on the Khalistan Referendum campaigners.

The January 29, 2023 voting which will be supervised by the PRC is going to be held at The Edge, Federation Square, Melbourne, VIC from 9am to 5pm and Sikhs from Melbourne and surroundings who are 18 years or older will be eligible to vote.

Dr Bakhsish Singh Sandhu, the president council of Khalistan and coordinator of SFJ, expressed gratitude to Minister Walubara for standing with the Sikh people in their struggle for the right to self-determination.

Arguing the case for Khalistan, Dr Sandhu stated that “the carving up of Punjab’s territory, the diversion of its key economic resources, the denial of religious freedom, the violation of fundamental civil and political rights of its people, and continuing econocide demonstrate Sikh subjugation, domination, and exploitation by India.”

“We are exercising the same right to self-determination that the British gave to the Scottish people in 2014, Canada gave to Quebeckers, in 1980 and 1995, and India used to attach several geographical areas to itself, most notably Junagadh in 1948, and Sikkim in 1975. We thank the Australian government for upholding their laws and democratic principles by allowing Khalistan Referendum under the supervision of the Punjab Referendum Commission, a body of internationally recognised experts on referendums and direct democracy,” Dr Sandhu further stated.

“Today Yidindji People by supporting Sikhs have set the example that all indigenous people should join hands and morally support each other when it comes to the right to self-determination and sovereignty,” stated Dr Sandhu.

Addressing the press conference, SFJ General Counsel Gurpatwant Singh Pannun announced that “voting Khalistan Referendum in Sydney will be held parallel to Quad Meeting in May while Indian Prime Minister Modi will be in town to highlight to the Quad leaders the Sikh people’s remarkable journey from being victims of Genocide to Khalistan Referendum.”

“Khalistan Referendum is a peaceful and democratic initiative which conforms with international law and norms to ascertain the will of the people on a political question,” added Pannun.

Speaker of the House of Representatives, Bougainville, Simone Pentanu,  emphasised the importance of the referendum as a tool to achieve the right to self-determination and reassured the Sikh people that the path of Referendum may be long but it is the only peaceful and sure way to sovereignty and independence which ensures the safety of the indigenous people from the hands of brutal forces that occupy their homeland.