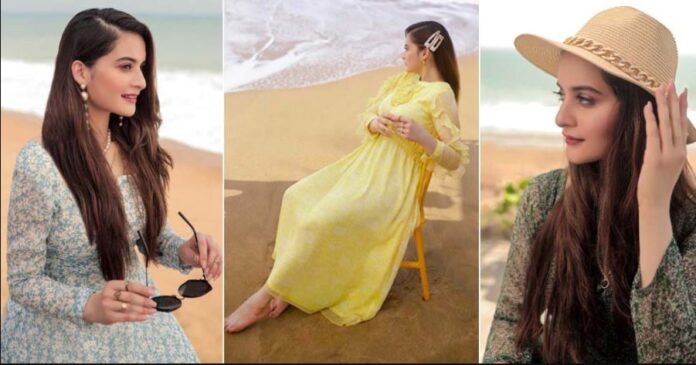 Our favorite actress Aiman Khan has launched own a new collection of her clothing band (ANM Closet). As can see in the viral pics, she is introducing her brand new collection named BY THE SEA by wearing different chic long dresses in 4 different colors. There is no doubt she has become a successful actress, model as very well as a well-known entrepreneur. There is no doubt Aiman Khan is considered 1 of the very most successful and very good talented actresses in Pakistan. But after marrying Muneeb Butt 3 years ago, Aiman Khan suddenly disappeared from the TV screen.

But sources revealed she will soon sign for a new drama again. And she is currently working on a photoshoot for her brand Aiman Minal Closet’s new collection. This will be the first collection of Aiman brand that she is doing a photoshoot all alone as her twin sister is enjoying her honeymoon vacation. We are talking about Aiman Khan’s very most successful drama before marriage HUM TV drama serial Ishq Tamasha achieved record-breaking success. Or there was a time when Aiman Khan had the honor of having the very most followers (Almost 8 million) in Pakistan on Instagram.

But after being away from the drama screen for 3 years this place has now been taken over by Ayeza Khan from Aiman Khan Or now the number of followers on her Instagram has reached close to 10 million. But today article we will see Aiman Khan doing a beach photoshoot for her brand AnM Closet new collection By The Sea. This occasion is refreshing her mind by wearing beautiful dresses of 4 different colors. One important thing is the price of dress in her new collection is said to be between Rs 6,000 and Rs 8,000. So let’s take a look at the photoshoot of Aiman Khan’s brand new collection. Would you like to see Aiman Muneeb working on a TV drama screen again? If so, please let us know in the comments section below. Thanks!