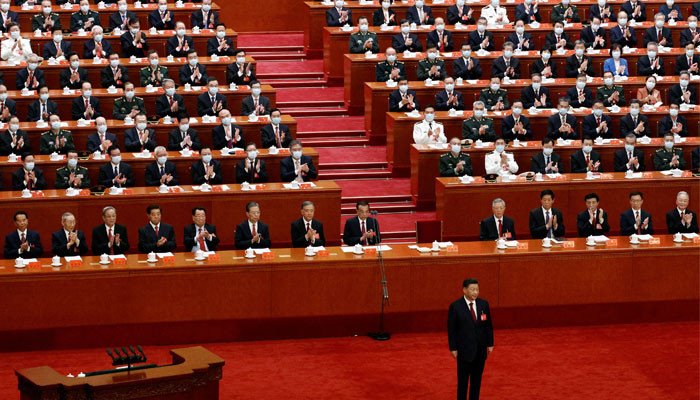 The Chinese Communist Party (CCP) Congress kicked off on Sunday with President Xi Jinping set to get a third term as the party’s general secretary, making him China’s most powerful ruler since Mao Zedong.

The one-party state is governed by CCP making the general secretary’s post the most important one. Apart from those posts, Xi also holds the title of chairman of the CCP Central Military Commission and the president of the country.

The congress will give the nod to Xi to continue as general secretary and chairman of CCP’s Central Military Commission. Xi’s presidency will be renewed in March 2023 at the annual session of China’s parliament.

Before 2018, a Chinese president was allowed to serve only two terms but the rule was scrapped after Xi’s second term was renewed.

In his opening address to the 2,300 delegates, President Xi hailed China’s rise as a global power and demanded unity around his leadership.

“Unity is strength, and victory requires unity,” Xi said after walking onstage to a thunderous reception from the hand-picked attendees who will vote during the week-long congress on the party leadership for the next five years.

The shuffle within the communist party means new political players will become part of China’s government, while some old faces may face the axe.

Xi, who took charge of the Communist party in late 2012, is expected to further consolidate his power and rule for another decade after he abolished the two-term presidential limit in 2018.

Wang Yang, 67, is number 4 in the politburo standing committee as the chairman of the national committee of the Chinese People’s Political Consultative Conference.

A key ally of Xi and his top foreign policy adviser, Wang Huning, is a current member of the politburo standing committee in charge of party ideology.

Zhao Leji, head of the party’s top anti-corruption watchdog, the Central Commission for Discipline Inspection, is expected to stay in the politburo standing committee as the 65-year-old hasn’t yet reached retirement age.

Out but to remain in political fray

Ranked No 2 in the elite politburo standing committee, Li Keqiang will step down as premier after two terms. He is, however, expected to stay on the committee, as he is 67.

The Chinese premier is also a member of the Political Standing Committee.

Here’s a list of premiers China has had, so far.

Expected to step down

Han Zheng, vice premier, 68, is expected to step down from the politburo.

Ding Xuexiang, a trusted ally of Xi and a member of the 25-member politburo, is a frontrunner to be promoted to the elite standing committee.

Hu Chunhua, widely seen as a political rising star, is poised to be promoted to the politburo standing committee.

Li, the party secretary of Shanghai and a member of the politburo, is a Xi ally and a strong contender to enter the standing committee.

— With additional input from Reuters and AFP.