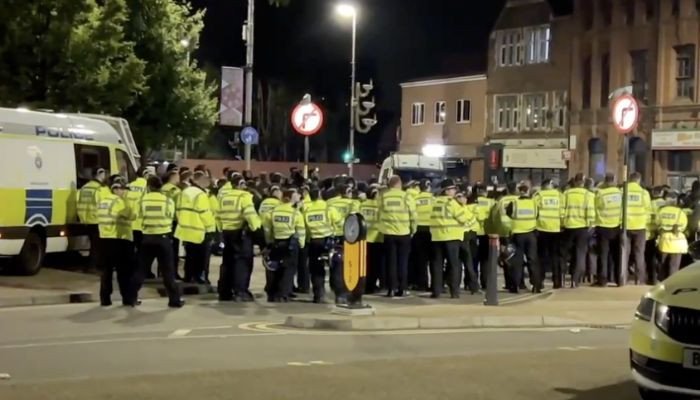 LONDON: Since the cricket match between India and Pakistan on Aug 28, Muslim and Hindu communities have been involved in violent clashes in England’s Leicester.

Police had to be deployed after the latest conflicts between the two parties caused “serious disorder”.

Andalou Agency reported that some people in the mob threw glass bottles at Muslim counter-protesters.

“We have had numerous reports of an outbreak of disorder in parts of the east Leicester area of the city,” Arab News quoted Leicestershire Police’s temporary chief constable, Rob Nixon, as saying.

The first heated argument was reported after the match where groups of young men were seen fighting with each other on the city’s Golden Mile.

Following the most recent tensions, two men were arrested out of which one is suspected of owning a bladed weapon. The other man is accused of conspiring to commit violent disorder.

The elder family members in both communities say that they have been living peacefully in society for decades. They say that false claims were being made on social media to fuel hate and anger.

A Muslim organisation requested the community to “stay away” from those hurling provocative comments and “let the police deal with it.”

Suleman Nagi, from the Federation of Muslims, said that the families should stop these young men from their violent protests.

Leicester East Labour MP Claudia Webbe asked people to “go home” and requested the men to comply with the police.