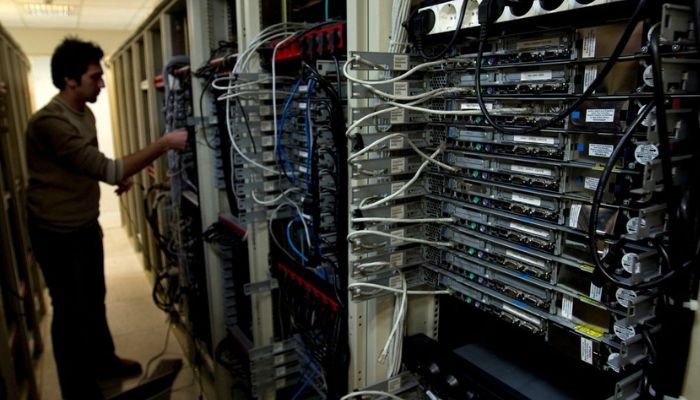 NEW YORK: The US Treasury Department on Friday issued guidance expanding the range of internet services available to Iranians despite US sanctions on the country, amid protests around Iran following the death of a 22-year-old woman in custody.

Officials said the move would help Iranians access tools that can be used to circumvent state surveillance and censorship but would not entirely prevent Tehran from using communications tools to stifle dissent, as it did by cutting off internet access for most citizens on Wednesday.

“As courageous Iranians take to the streets to protest the death of Mahsa Amini, the United States is redoubling its support for the free flow of information to the Iranian people,” Deputy Treasury Secretary Wally Adeyemo said.

“With these changes, we are helping the Iranian people be better equipped to counter the government’s efforts to surveil and censor them.”

Adeyemo added that Washington in the coming weeks would continue to issue guidance.

Public outrage in Iran over Amini’s death last week showed no sign of abating after days of protests in Tehran and other cities, with protesters torching police stations and vehicles earlier on Thursday and reports of security forces coming under attack.

Amini, a Kurdish woman, was arrested by the morality police in Tehran for wearing “unsuitable attire” and fell into a coma while in detention. The authorities have said they would investigate the cause of her death.

Internet monitoring group NetBlocks on Thursday said a new mobile internet disruption has been registered in Iran, where access to social media and some content is tightly restricted.

NetBlocks reported “near-total” disruption to internet connectivity in the capital of the Kurdish region on Monday, linking it to the protests.

Washington has long provided some internet-related exceptions to its sanctions on Iran, but Friday’s update to the general license seeks to modernize them, the Treasury said.

The new license includes social media platforms and video conferencing and expands access to cloud-based services used to deliver virtual private networks (VPNs), which provide users with anonymity online, and other anti-surveillance tools, according to a Treasury official, who briefed reporters on the license on condition of anonymity.

The license also continues to authorize anti-virus, anti-malware and anti-tracking software, the Treasury said, and removes a previous condition that communications be “personal” to ease compliance for companies.

Asked how the expanded license would help Iranians if their government again shuts down internet access, a State Department official also briefing reporters said Iran’s government would still have “repressive tools for communication.”

The new license makes it “easier for the Iranian people to confront some of those oppressive tools,” the official said. “It doesn’t mean that they don’t exist anymore.”

SpaceX CEO Elon Musk responded to a Twitter post from Secretary of State Antony Blinken about the new license on Friday with the comment “Activating Starlink,” a reference to the firm’s satellite broadband service — already provided to Ukraine for its fight against Russia’s invasion.

Musk said on Monday his company would provide Starlink to Iranians, and would ask for a sanctions exception to do so.

The Treasury official briefing reporters said: “Our understanding of Starlink is that what they provide would be commercial grade, and it would be hardware that’s not covered in the general license; so that would be something they would need to write into Treasury for.”

A State Department spokesperson later said of Friday’s updated license that it was self-executing and that “anyone who meets the criteria outlined in this general license can proceed with their activities without requesting additional permissions.”

The State Department spokesperson added that if SpaceX were to determine that some activity aimed at Iranians requires a specific license, “OFAC would welcome it and prioritize it”.

“By the same token, if SpaceX determines that its activity is already authorized and has any questions, OFAC also welcomes that engagement,” the State Department spokesperson said.