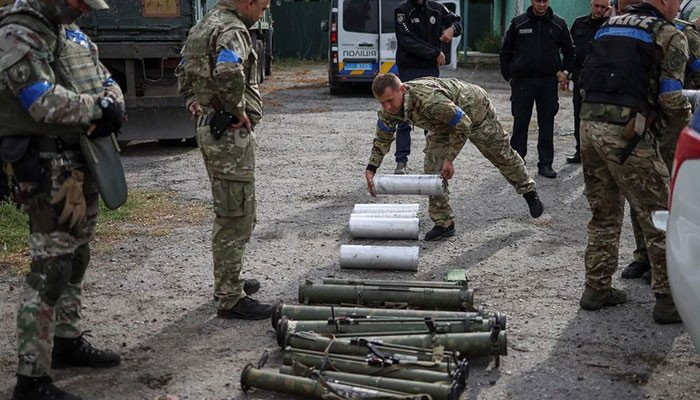 ZOLOCHIV, UKRAINE: Ukraine’s President Volodymyr Zelenskiy called on the West to speed up deliveries of weapons systems as Ukrainian troops move to consolidate control over a large swath of northeastern territory seized back from Russia.

Since Moscow abandoned its main bastion in northeastern Ukraine on Saturday, marking its worst defeat since the early days of the war, Ukrainian troops have recaptured dozens of towns in a stunning shift in battleground momentum.

A senior US military official said Russia has largely ceded territory near Kharkiv in the northeast and pulled many of its troops back over the border.

Washington and its allies have provided Ukraine with billions of dollars in weapons that Kyiv says have helped limit Russian gains. In a video address late on Monday, Zelenskiy said Ukraine and the West must “strengthen cooperation to defeat Russian terror”.

US Secretary of State Antony Blinken said Ukrainian forces have made “significant progress” with Western support.

“What they have done is very methodically planned out and of course it’s benefited from significant support from the United States and many other countries in terms of making sure that Ukraine has in its hands the equipment it needs to prosecute this counteroffensive,” Blinken said during a news conference in Mexico City.

Washington announced its latest weapons programme for Ukraine last week, including ammunition for HIMARS anti-rocket systems, and has previously sent Ukraine NASAMS surface-to-air missile systems, which are capable of shooting down aircraft.

Zelenskiy said Ukraine had recaptured roughly 6,000 square km (2,400 square miles) of territory, a sliver of Ukraine’s overall land mass of around 600,000 square km. The recaptured land is approximately equivalent to the combined area of the West Bank and Gaza.

Russia has taken control of around a fifth of Ukraine since its troops invaded on February 24.

President Vladimir Putin and his senior officials have been largely silent in the face of Russian forces’ worst defeat since April, when they were repelled from the outskirts of Kyiv.

Kremlin spokesman Dmitry Peskov on Monday side-stepped a reporter’s question of whether Putin still had confidence in the military leadership.

“The special military operation continues. And it will continue until the goals that were originally set are achieved,” Peskov said.

Putin was shown on state TV on Monday chairing a meeting on the economy at which he said Russia was holding up well in the face of Western sanctions.

“The economic blitzkrieg tactics, the onslaught they were counting on, did not work,” he said.

Sony Music joined a list of global companies exiting Russia, saying on Tuesday it was transferring the business and musicians to local management due to the Ukraine conflict.

“As the war continues to have a devastating humanitarian impact in Ukraine, and sanctions on Russia continue to increase, we can no longer maintain a presence in Russia,” Sony Music said in a statement.

The International Monetary Fund’s executive board, under pressure to provide emergency funding to countries facing food price shocks, reviewed a plan on Monday that would help Ukraine and other countries hit hard by Russia’s war, sources familiar with the matter told Reuters.

As thousands of Russian troops pulled back, leaving behind ammunition and equipment, Russia fired missiles at power stations, causing blackouts in the Kharkiv and adjacent Poltava and Sumy regions.

Shelling of residential areas and infrastructure sparked fires in the city throughout the day on Monday, regional emergency services said on Facebook.

Shelling around the Russian-held Zaporizhzhia nuclear power plant has sparked grave concerns about the risk of radioactive catastrophe. The UN atomic watchdog has proposed the creation of a protection zone around the nuclear plant, Europe’s largest, and both sides are interested, IAEA chief said.

“We are playing with fire,” Rafael Grossi told reporters.” We can not continue in a situation, where we are one step away from a nuclear accident. The safety of the Zaporizhzhia power plant is hanging by a thread.”

Britain’s defence ministry said Moscow was struggling to bring reserves to the south, where Ukraine is attempting to isolate thousands of Russian soldiers on the west bank of the Dnipro River, forcing most Russian forces to focus on “emergency defensive actions.”

Ukraine’s southern command said its forces had recaptured 500 square km of territory in the south, killing 59 Russian troops in the past 24 hours and destroying 20 pieces of equipment.

The situation there could not be independently confirmed.

As Ukrainian forces swept closer into territory seized from Russian troops in the north, joyful residents returned to their frontline villages for the first time in months.

“People are crying, people are joyful, of course. How could they not be joyful!” said retired English teacher Zoya, 76, in the now-quiet village of Zolochiv, north of Kharkiv and 18 km from the Russian frontier.