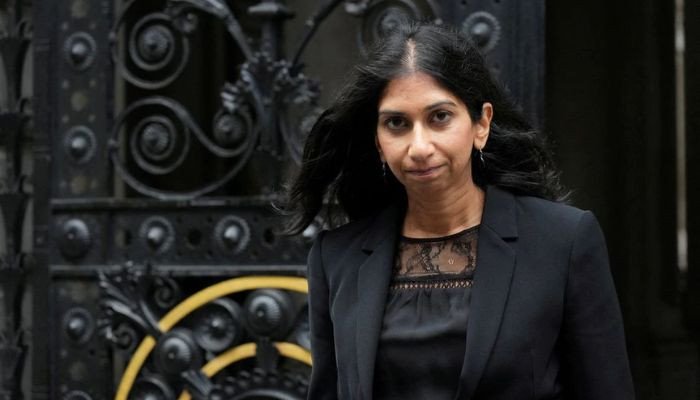 LONDON: Britain’s interior minister quit on Wednesday with a broadside at Liz Truss before her lawmakers openly quarrelled in parliament, underscoring the erosion of the prime minister’s authority after just weeks in the job.

The departure of Suella Braverman, over a “technical” breach of government rules, means Truss has now lost two of her most senior ministers in less than a week, both replaced by politicians who had not backed her for the leadership.

Hours after the resignation, lawmakers openly rowed and jostled amid confusion over whether a vote on fracking was a confidence vote in her administration.

Opposition parliamentarians complained that Truss’s politicians were being manhandled to make them vote with the government, though two lawmakers from her Conservative party said they had not seen any such behaviour.

“Discipline is falling apart, we can’t go on like this,” one Conservative lawmaker told Reuters.

Another, Charles Walker, told BBC television he was “livid” at the “talentless people” who had put Truss into power, just because they wanted a job. “I think it is a shambles and a disgrace,” he said, in a video that a couple of other Conservative lawmakers tweeted in agreement.

Truss, in power for just over six weeks, has been fighting for her political survival ever since Sept. 23, when she launched a “mini-budget”, an economic programme of vast unfunded tax cuts that sent shockwaves through financial markets.

A handful of lawmakers have openly called for her to quit, and others have discussed who should replace her. Following the scenes in parliament, there were reports that the person responsible for Conservative party discipline, and their deputy, had quit.

Business minister Jacob Rees-Mogg, asked on television if the reports were correct, said: “I’m not entirely clear on what the situation is.”

Truss’s office said later they both remained in their posts, but the episode illustrated the confusion in government and underscored the prime minister’s faltering authority.

The latest turn in what seems to be a never-ending drama at Westminster comes as millions of Britons worry about rising inflation and cuts to public spending, with the political elite seen to be doing little to ease those concerns.

Truss had just told lawmakers that she was sorry for the mistakes she had made but was not going to quit, when reports swirled that her interior minister, or home secretary, had gone.

Confirming her departure, Braverman said she had broken the rules by sending an official document from her personal email to a parliamentary colleague. But she added she had serious concerns about the government and that just hoping problems would go away was not a viable approach.

“I have made a mistake, I accept responsibility, I resign,” she said in a letter to the prime minister.

As a replacement, Truss appointed former minister Grant Shapps, who said recently that Truss faced a massive battle to survive.

He also failed to offer a ringing endorsement of the prime minister. On arrival at his new workplace, Shapps admitted the government had “obviously had a very difficult period.”

But he added, referring to Truss’s new finance minister: “Jeremy Hunt, I think, has done a great job of settling the issues relating to that mini budget.”

Media reports suggested Truss and Braverman may have clashed over immigration. Braverman, who said recently that she dreamt of seeing asylum seekers being deported to Rwanda, has advocated a hard line on immigration numbers.

Truss had suggested restrictions could be lifted in some sections of the economy; as Hunt works to find ways to boost the economy, easing immigration rules further could be one option.

After a move to make a vote on fracking a confidence matter, scenes in parliament descended into chaos as Conservative lawmakers were confused over whether they were obliged to vote in line with the government.

The motion by the main opposition Labour Party was defeated by 326 votes to 230 and the government proposal won, but some lawmakers said they were angry over the tactics, or lack of them, used by the government.

Voting results showed that tens of Conservative lawmakers did not take part in the vote, although some of those were on work trips or unwell.

Hours earlier, Truss had faced a raucous prime minister’s questions session in parliament for the first time since Hunt scrapped most of her tax-cutting plan. She came out fighting.

Asked by Labour leader Keir Starmer why she should remain in power, she said: “I am a fighter and not a quitter.”

“I have been very clear that I am sorry, and I have made mistakes,” Truss told jeering opposition lawmakers in parliament. “…I’m prepared to take the tough decisions.”

The prime minister was met with laughter, boos and jeers, especially when she told Labour it needed to grasp economic reality.

She also tried to appease lawmakers over her future spending plans. After days of uncertainty, she said she was committed to increasing state pension payments in line with the level of inflation.

But some were not convinced.

Conservative lawmaker William Wragg said he had submitted a letter of no confidence in the prime minister, joining a handful of others who have called for her to go. Wragg said he was “ashamed” of facing voters after the mini-budget.

The Conservative Party is some 30 points behind Labour, according to opinion polls, and YouGov ranks Truss as the most unpopular leader the pollster has ever tracked.