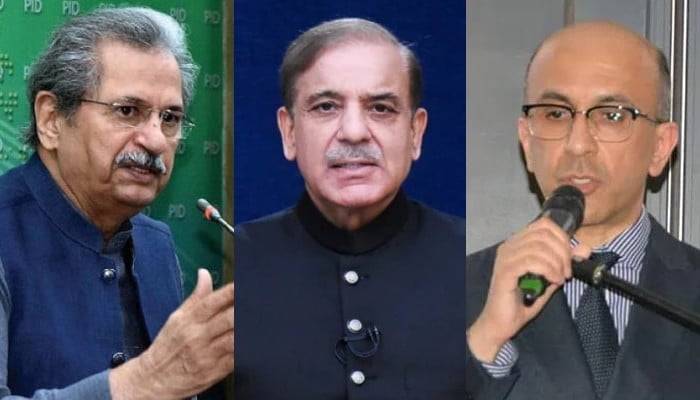 LONDON: Senior Pakistan Tehreek-e-Insaf (PTI) leaders — Shafqat Mahmood and Aneel Mussarat — provided crucial help to Prime Minister Shahbaz Sharif in a high-profile money-laundering investigation by the National Crime Agency (NCA) and the Daily Mail defamation case in the form of getting a clean chit and apology and removal of the defamatory article by the publication.

Paperwork seen by Geo News shows that PTI donor and Imran Khan’s friend Mussarat and Mahmood’s evidence was used by PM Shehbaz’s lawyers first in the NCA money-laundering investigation and then in defamation case against the Daily Mail publishers over a defamatory article by David Rose on 14 July 2019.

The entire article in Daily Mail was published on the basis that PM Shehbaz and his son-in-law Imran Ali Yousaf were involved in looting British taxpayers’ money that was given to Pakistan to help victims of the Kashmir earthquake in 2005 but in a big blow to this claim, the Department for International Development (DFID) rejected claims by Daily Mail and said that the Pakistani premier had not misused funds and that the UK aid programme was transparent and clean.

That clarification helped the PML-N leader but it was Mahmood who provided a strong witness statement to PM Shehbaz.

During a dinner organised by both PTI leaders at the Dorchester Hotel on Park Lane on January 22, 2020, when asked about his view on the Daily Mail article and the alleged corruption in DFID funds, Mahmood replied that Britain’s aid programme to Pakistan under the Pakistan Muslim League-Nawaz (PML-N) and the PTI governments was “by and large” corruption free.

Mahmood clarified that overall the DFID programme has been well managed and run properly under the Pakistan People’s Party (PPP) and PML-N government.

PM Shehbaz’s lawyers in the defamation case used this statement in support of the premier’s legal position that the allegations made by Rose were false.

Mahmood rebutted the sensational allegations made by the Mail on Sunday in which the paper claimed that hundreds of millions of pounds in British aid are being poured into education in Pakistan – where corrupt officials have creamed off vast amounts of cash by creating thousands of fake teaching jobs and pocketing the salaries.

The paper had falsely claimed, “the fraud is just one of the scandals in education across Pakistan, to which Britain’s Department for International Development (DFID) has committed £700 million, supposedly to help the country’s impoverished children”.

“By and large it has been a good programme. It’s for the DFID to assess whether the objectives were achieved or not. The DFID has a good relationship with the provincial governments and we are asking them to inform them that we are forming a data centre at the federal level,” said the PTI leader.

Mahmood said that according to his knowledge no corruption took place in the DFID programme. He went on to ask the DFID to continue supporting Pakistan through education funding.

“We want the DFID to continue its support programme with us.”

Mussarat’s accounts were investigated at the PTI government’s request and the evidence was established that the PTI donor and the prime minister were not part of the money laundering scheme. It was that crucial evidence which led to the NCA giving a clean chit to the premier.

PM’s lawyers provided evidence to the NCA showing that all three loans were returned to Musarrat on time and that there was no money laundering involved.

Interestingly, Pakistan’s Assets Recovery Unit (ARU) forwarded a National Accountability Bureau (NAB) document to the NCA alleging that PM Shehbaz had failed to satisfy Pakistani authorities about the source of funds used to buy four London assets starting from 2005 and provided details of Mussarat’s business with the PM to make sure that both are investigated as long as the objective of pinning the premier was achieved. The NCA was told that Mussarat was a frontman of the prime minister.

The NCA obtained Assets Freezing Orders (AFO) from the Westminster Magistrates’ Court as part of the Frozen Funds Investigation in December 2019 to investigate PM Shehbaz for running a money laundering scheme with help of his son Suleman Shehbaz.

The NCA lifted AFOs in September 2021, giving clearance to the premier after finding no proof of money laundering, misuse of public office, corruption and illegal activities.