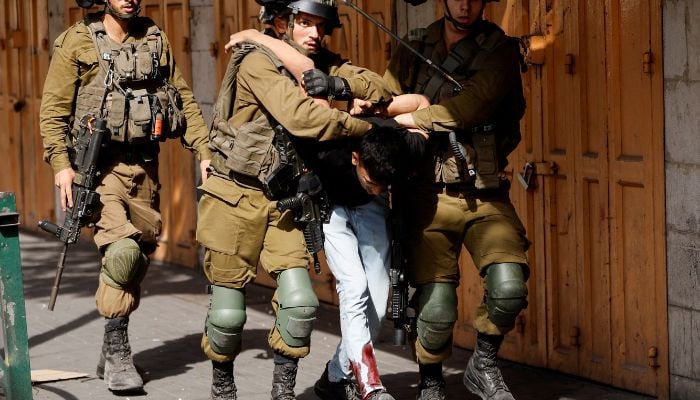 NABLUS: Israeli forces martyred two Palestinian militants on Friday, Palestinian sources said, in what the Israeli military said was a response to a drive-by shooting at soldiers in the occupied West Bank.

The Israeli military said its forces shot at “two suspicious vehicles” after a passing car fired at one of its posts near the city of Nablus, which has been at the heart of a surge in violence in the West Bank over recent months.

No soldiers were injured and “hits were identified,” the Israeli military statement said, adding that soldiers launched a search for additional suspects.

The Palestinian Health Ministry identified the dead men as Emad Abu Rasheed, 47, and Ramzi Zabara, 35, both from Askar refugee camp near Nablus. It said a third man was wounded.

The Palestinian Authority, which exercises limited self-rule in the West Bank, coordinates security with Israel. The Israeli military did not respond to a question on the men’s affiliation with the Palestinian Civil Guard.

The Palestinian Foreign Ministry condemned the killing, and said Israel was fully responsible.

Violence has been on the rise in the West Bank ahead of a Nov. 1 general election in Israel.

Friday’s incident occurred about an hour after the military said it was removing some of the barriers blocking entry to Nablus, which has been under blockade for days.

Earlier this week, the Israeli military cracked down on the “Den of Lions” militant group, comprised mainly of young Nablus gunmen with loose factional affiliations, killing three of its leaders.

More than 100 Palestinians from the West Bank have been martyred by Israeli forces this year, while a string of fatal street attacks by Palestinians have killed 20 people in Israel and Israeli settlements.

Four members of Israel’s security forces have also been killed, including at least one by the Den of Lions, which Israel describes as a “terrorist” group.