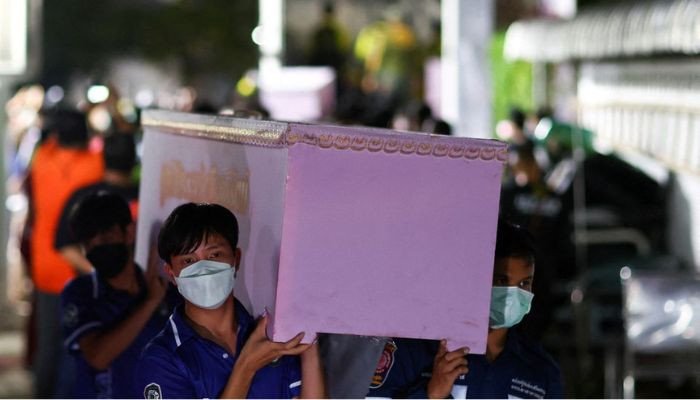 Pink and white coffins adorned with gold and bearing the bodies of the 22 children killed in a gun and knife rampage in Thailand were loaded onto a truck late on Thursday and driven away in the darkness.

Thailand’s deputy prime minister, Anutin Charnvirakul, clasped his hands together and bowed his head as the truck, followed by ambulances carrying the bodies of further victims, pulled away in the small town of Na Klang in northeastern Thailand.

“All Thai people, and all people around the world who know about this … will feel so depressed and saddened,” Anutin said.

The children were killed on Thursday by a former policemen, who witnesses said burst into a daycare centre and started shooting and slashing those inside.

Altogether, 36 people were killed by Panya Khamrapm, who police said was discharged from duty last year for drugs use and had attended a court hearing on a narcotics charge just moments before the attack.

Rescue workers had earlier brought the bodies of the victims to a local police station and placed them into the coffins as medical staff stood by solemnly and relatives of the dead gathered, some wiping away tears.

“Nobody wants this to happen. It’s a scene that nobody wants to see. It’s harrowing,” said Piyalak Kingkaew, who led the rescue team that was the first to arrive.

His team shared images with Reuters of the scene of the massacre at the daycare centre, which showed tiny bodies laid out on blankets.

The body of one boy dressed in a Manchester United Shirt was seen on a Winnie the Pooh bed cover in a room with walls decorated with cartoon animals.

“We are used to seeing a large number of bodies, we’ve been through it before, but this incident is the most harrowing of all,” Piyalak added.

“They were little kids who were still sleeping.”