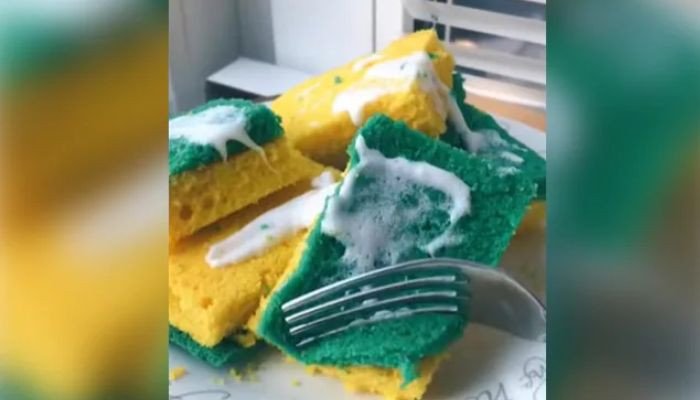 In a bizarre video, a cake that looked like a used kitchen sponge with leftover dish soap on it has disgusted social media users.

Hyper-realistic cakes have been taking the internet by storm for a while now even starting the “everything is cake” trend, but this time, things have gotten out of hand.

Indonesia-based food and travel enthusiast Andre Sarwono shared the video on Instagram which showed the cake served on a plate. “Edible washing sponge,” he wrote in the caption.

He added that the cake was “delicious”.

The dessert had a yellow base and a green top just like the sponge used in many homes to clean utensils and sometimes even tiles.

While the food blogger was “amazed with the modern cake that tasted good” and “looked cool” at the same time, the internet was not impressed.

“Immediately no,” said one user.

“I wouldn’t eat this cake,” said another.

“I wouldn’t eat it, but I admire the art of the person who made it,” a fourth added.

Since being shared, the video has received over 61,000 likes and even more views.