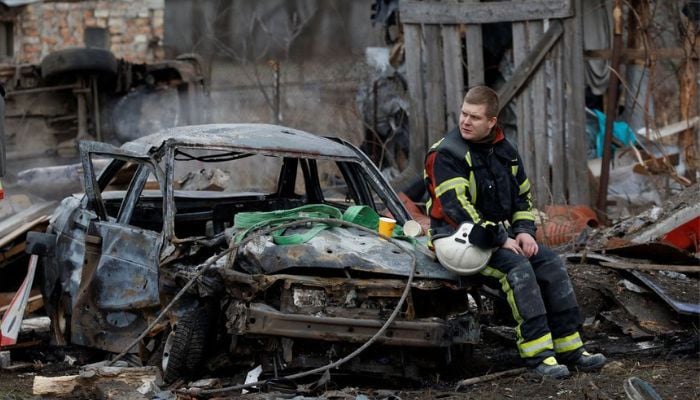 KYIV: Residents of the Ukrainian capital Kyiv were urged to head to air raid shelters early on Friday as sirens wailed across the city, a day after Russia carried out one of the biggest aerial assaults since it started the war in February.

Shortly after 2.00 am Kyiv’s city government issued an alert on its Telegram messaging app channel about the air raid sirens and called on residents to proceed to shelters.

Olekskiy Kuleba, governor of Kyiv region, said on Telegram that an “attack by drones” was under way.

Ukraine’s military said 16 Iranian-made Shahed drones were launched and all destroyed. Kyiv mayor Vitali Klitschko said 7 were aimed at city and that one administration building was partly destroyed.

Kyiv says Iran is supplying Moscow with drones for its air attacks, but Tehran says it last sent drones to Russia before the war started.

It said Moscow’s forces also shelled 20 settlements around the bombed out town of Bakhmut in eastern Ukraine, where some of the fiercest fighting is being waged, and more than 25 settlements in the Kherson and Zaporizhzhia regions.

Reuters could not immediately verify the battlefield reports.

The areas where loss of power was “especially difficult” included the capital Kyiv, Odesa and Kherson in the south and surrounding regions, and around Lviv near the western border with Poland, Zelenskiy said.

“But this is nothing compared with what could have happened if it were not for our heroic anti-aircraft gunners and air defence,” Zelenskiy said.

NATO Secretary General Jens Stoltenberg called on NATO member states to supply more weapons to Ukraine, according to an interview published on Friday.

“I call on allies to do more. It is in all our security interests to make sure Ukraine prevails and (Russian President Vladimir) Putin does not win,” Stoltenberg told German news agency DPA.

Stoltenberg told DPA that military support for Ukraine was the fastest way to peace.

“We know that most wars end at the negotiating table — probably this war too — but we know that what Ukraine can achieve in these negotiations depends inextricably on the military situation,” he said.

Britain said on Friday it has given Ukraine more than 1,000 metal detectors and 100 kits to deactivate bombs and to help clear minefields.

“Russia’s use of landmines and targeting of civilian infrastructure underline the shocking cruelty of Putin’s invasion,” British defence minister Ben Wallace said in a statement.

“This latest package of UK support will help Ukraine safely clear land and buildings as it reclaims its rightful territory.”

The metal detectors, made by German firm Vallon, can help troops clear safe routes on roads and paths by helping to remove explosive hazards, the defence ministry said, while the kits can de-arm the fuse from unexploded bombs.

Wallace said on Thursday Britain would allocate 2.3 billion pounds ($2.77 billion) to Ukraine in military aid in 2023, matching the amount it has provided this year.

Moscow has repeatedly denied targeting civilians, but Ukraine says its daily bombardment is destroying cities, towns, and the country’s power, medical and other infrastructure.

Russia invaded Ukraine on Feb. 24 in what President Vladimir Putin calls a “special military operation” against what it perceives as threats to its security.

Ukraine and its Western allies have denounced Russia’s actions as an imperialist-style land grab and imposed sanctions to try to disrupt the campaign.

The 11-month war has killed tens of thousands of people, driven millions from their homes, left cities in ruins and shaken the global economy, driving up energy and food prices.

The heaviest fighting is in the eastern Donetsk and Luhansk provinces that together make up the industrial Donbas region. Russia claimed in September to have annexed them, along with the southern provinces of Kherson and Zaporizhzhia, but does not fully control any of them.