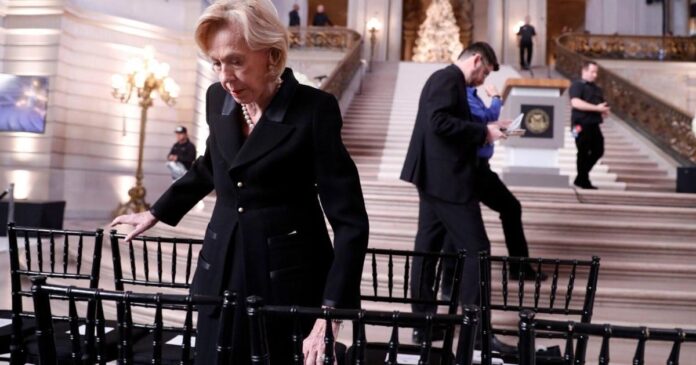 Charlotte Mailliard Shultz the long-reigning chief of San Francisco protocol and unofficial aide to 10 mayors died Friday of complications from cancer. She was 88.

Friends and family called her a true San Franciscan . She was from Texas who helped the city look its best. As the city’s chief of protocol for more than five decades, she assisted consuls general, solidified bonds with sister cities, and promoted San Francisco with visiting dignitaries.

She had a remarkable talent for organizing events and representing our city with dignity and class, including hosting foreign heads of state, said U.S. Sen. Dianne Feinstein a former mayor of San Francisco. Charlotte really put San Francisco on the map as an international city.

Shultz was married three times including to real estate developer Melvin Swig, who owned the Fairmont Hotel. He died of cancer in 1993. In February, she lost her third husband, former U.S. Secretary of State George Shultz, who died at the age of 100.

Charlotte Smith was raised in the small town of Borger Texas, by parents who ran a five-and-dime store the San Francisco Chronicle reported Friday. She graduated from the University of Arkansas with a degree in marketing merchandising and fashion design.

Shultz lived in Los Angeles, Houston, and Dallas, before moving to San Francisco.