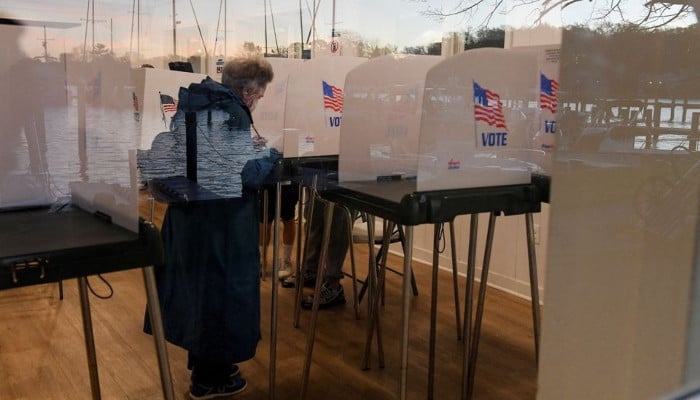 PHOENIX, ARIZ/BIRMINGHAM, MICH: Republicans were favoured to wrest control of the US House of Representatives away from President Joe Biden’s Democrats based on early returns in Tuesday’s midterm elections, though the prospects of a “red wave” appeared to have dimmed.

With polls closed across most of the country, Republicans had flipped five Democratic seats in the US House, Edison Research projected, the very number needed to capture a majority and cripple Biden’s legislative agenda.

But importantly, that number can change as close to 200 of the 435 House races had yet to be called, including some with vulnerable Republican incumbents.

Early results suggested Democrats would avoid the type of wipeout election that some in the party had feared, given Biden’s sagging approval rating and voter frustration over inflation.

But even a narrow Republican House majority would be able to block Biden’s priorities while launching politically damaging investigations into his administration and family.

The US Senate remained too close to call, with pivotal races in Pennsylvania, Nevada, Georgia and Arizona all looking like toss-ups. The Georgia race could end up in a December 6 runoff, possibly with the Senate at stake.

The final outcome of the congressional races is unlikely to be known any time soon. More than 46 million Americans voted ahead of Election Day, either by mail or in person, according to data from the US Election Project, and state election officials caution that counting those ballots will take time.

One sign of Republican strength could be found in several competitive House districts that Biden would have won in 2020 under recently redrawn boundaries.

In Rhode Island’s 2nd district, Republican Allan Fung trailed Democrat Seth Magaziner by just 4 percentage points, and was on track to outperform Republican former President Donald Trump who would have lost the district by 14 points in 2020.

Local officials reported isolated problems across the country, including a paper shortage in a Pennsylvania county. In Maricopa County, Arizona – a key battleground – a judge rejected a Republican request to extend voting hours after some tabulation machines malfunctioned.

The problems stoked evidence-free claims among Trump and his supporters that the failures were deliberate.

Scores of Republican candidates have echoed Trump’s false claims that his 2020 loss to Biden was due to widespread fraud.

In swing states such as Arizona, Michigan and Nevada, the Republican nominees to head up the states’ election apparatus have embraced Trump’s falsehoods, raising fears among Democrats that, if they prevail, they could interfere with the 2024 presidential race.

“They deny that the last election was legitimate,” Biden said on a radio show aimed at Black voters. “They’re not sure they’re going to accept the results unless they win.”

Trump, who cast his ballot in Florida, has frequently hinted at a third presidential run. He said on Monday that he would make a “big announcement” on November 15.

Biden was expected to watch the results from the White House, where the usually quiet corridors were abuzz with aides. A Biden adviser, anticipating a tough evening, said Democrats had done the best they could given higher gas prices and inflation, in part due to Russia’s invasion of Ukraine.

The party that occupies the White House almost always loses seats in midterm elections, but Democrats had hoped the Supreme Court’s June decision to overturn the nationwide right to abortion would help them defy that history.

But stubbornly high annual inflation, which at 8.2% stands at the highest rate in 40 years, has weighed on their chances throughout the campaign.

“The economy is terrible. I blame the current administration for that,” said Bethany Hadelman, who said she voted for Republican candidates in Alpharetta, Georgia.

“We have criminals constantly repeating crimes. They go to jail and come out a few hours later or the next day,” said John Delsanto, 35, a legal assistant in New York City who said he voted for Zeldin.

A Reuters/Ipsos poll this week found just 39% of Americans approved of the way Biden has done his job. Some Democratic candidates deliberately distanced themselves from the White House as Biden’s popularity languished.

Trump’s polling is similarly low, with just 41% of respondents to a separate recent Reuters/Ipsos poll saying they viewed him favourably.

In Congress, a Republican-controlled House would be able to thwart Democratic priorities such as abortion rights and climate change, while a Republican Senate would hold sway over Biden’s judicial nominations, including any Supreme Court vacancy.

Republicans could also initiate a showdown over the country’s debt ceiling, which could shake financial markets.

Republicans will have the power to block aid to Ukraine if they win back control of Congress, but analysts say they are more likely to slow or pare back the flow of defence and economic assistance.