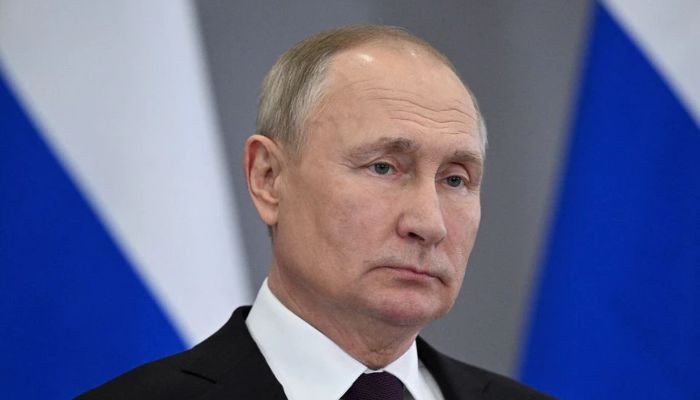 LONDON: Russian President Vladimir Putin said on Wednesday he was introducing martial law in four Russian-occupied regions of Ukraine that Moscow claimed last month as its own territory but is struggling to defend from Ukrainian advances.

In televised remarks to members of his Security Council, Putin boosted the security powers of all Russia’s regional governors and ordered the creation of a special coordinating council under Prime Minister Mikhail Mishustin to step up the faltering war effort.

He said the “entire system of state administration”, not only the specialised security agencies, must be geared to supporting what Russia calls its “special military operation”.

The package of moves, nearly eight months into the war, marked the latest escalation by Putin to counter a series of major defeats at the hands of Ukrainian forces since the start of September.

The US State Department said Russia was resorting to “desperate tactics”. A Kyiv official said it would change nothing.

The published Kremlin decree ordered an “economic mobilisation” in eight regions adjoining Ukraine, including Crimea, which Russia invaded and annexed in 2014.

It placed them in a special regime one step below martial law and allowed for the restriction of people’s movements.

Putin conferred additional powers on the leaders of all Russia’s 80-plus regions to protect critical facilities, maintain public order and increase production in support of the war effort.

But it was far from clear how fast or how effectively the new measures might bolster Russia’s military position on the ground. They came as Russian-installed officials in Ukraine’s occupied Kherson region told civilians to leave some areas as soon as possible in anticipation of an imminent Ukrainian attack.

Russia expert Mark Galeotti said on Twitter the moves amounted to “a declaration of variegated martial law across the whole of Russia”, with some level of emergency regulation now applying across the whole country.

He said it was unclear whether regional officials would use the extra powers as Moscow wanted, ignore them, or exploit them as opportunities to embezzle state resources.

The Russian-installed acting governor of occupied Kherson, Vladimir Saldo, confirmed that he would hand power to the military, according to Russian news agencies. But many regional chiefs – including Moscow’s mayor Sergei Sobyanin – said they did not plan to make any immediate changes.

Ukrainian presidential adviser Mykhailo Podolyak said on Twitter: “This does not change anything for Ukraine: we continue the liberation and de-occupation of our territories.”

Ukrainian gains have forced Putin into a series of escalatory steps within the past month: the unpopular call-up of hundreds of thousands of extra troops, the unilateral annexation of the four Ukrainian regions — condemned as illegal by an overwhelming majority of nations at the UN General Assembly — and a threat to resort to nuclear weapons to defend what Russia sees as its own lands.

After months of assurances from the Kremlin that the campaign was going according to plan, the increasingly urgent measures have brought the reality of the war much closer to home for many ordinary Russians.

The failings of the military and the chaotic state of the mobilisation — which prompted hundreds of thousands of men to flee abroad — have drawn unprecedented criticism even from Putin allies.

Some regions have resorted to public appeals to provide newly mobilised soldiers with basic equipment to head to the front — a problem implicitly acknowledged by Putin.

“Our soldiers, no matter what tasks they perform, must be provided with everything they need. This applies to the equipment of barracks and places of deployment, living conditions, kit and gear, food and medical care,” he said.

“We have every opportunity to resolve all the issues that arise here — and they do exist — at a modern level that is worthy of our country.”

Paul Stronski, a Russia expert with the Carnegie Endowment for International Peace, said Putin was placing more responsibility on regional heads by ordering them onto a war footing, but without making clear what they actually needed to do.

Stronski, a former Russia specialist at the US State Department, said the president’s orders epitomised Moscow’s struggles to implement an effective war plan.

“Putin had a vision seven months ago, it’s gone horribly wrong and he still hasn’t quite figured out how to fix that vision of how to run a war,” he said.