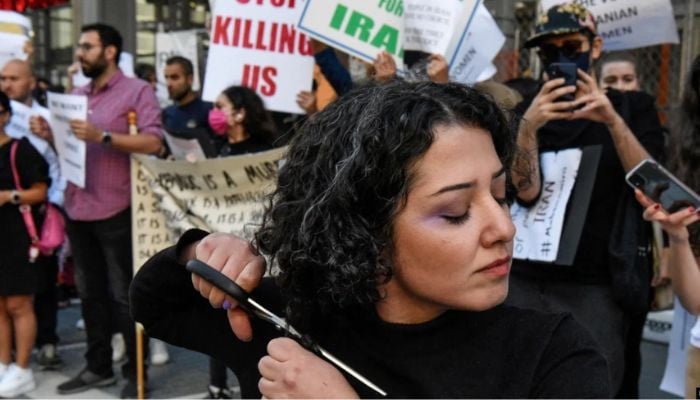 DUBAI: Protests broke out in restive southeastern Iran on Friday, with demonstrators attacking banks, state media reported, as a senior hardline cleric called for tough measures against demonstrators across the country.

The Islamic Republic has been gripped by five weeks of demonstrations that erupted after the death in police custody of 22-year-old Mahsa Amini last month.

On Friday, police arrested at least 57 people, described as “rioters“, after protesters threw rocks and attacked banks in the city of Zahedan, provincial police chief Ahmad Taheri was quoted as saying by the official news agency IRNA.

State television said up to 300 protesters marched in the city after Friday prayers. It showed banks and shops with smashed windows.

Videos posted on social media purported to show thousands of protesters chanting “Death to the dictator”, a reference to Supreme Leader Ayatollah Ali Khamenei, and “Death to Basijis”, in reference to the Basij militia which has been widely used to crack down on protests. Reuters could not verify the videos.

Zahedan is the capital of restive southeastern Sistan-Baluchistan province which is the home of Iran’s Baluch minority. Amnesty International has said security forces killed at least 66 people in a violent crackdown after Friday prayers in Zahedan on Sept. 30.

“For what crime were they killed? Officials, the country’s managers, the Islamic Republic’s Supreme Leader (Khamenei) who commands all armed forces are all responsible before God,” said Molavi Abdolhamid, a leading cleric, according to a video of his Friday prayers sermon in Zahedan posted on his website.

In Tehran, hardline cleric Ahmad Khatami said: “The judiciary should deal with the rioters – who betrayed the nation and poured water into the enemy’s watermill – in such a way that others don’t again fancy to riot.”

“They have told deceived kids if they stay in the streets for a week the regime will fall. Dream on!,” Khatami said in a Friday prayers sermon, according to state media.

Iran has blamed “thugs” linked to “foreign enemies” for the unrest.

The nationwide protests have turned into one of the boldest challenges to Iran’s clerical rulers since the 1979 revolution. Protesters have called for the downfall of the Islamic Republic, although the protests do not seem close to toppling the system.

Videos posted on social media and said to be from northwestern Tabriz showed protesters shouting “Disgraceful!” at riot police who shot tear gas to disperse them on Friday.

Tabriz, Iran’s sixth most populous city, is home to many from the Azeri ethnic minority.

Other online videos purported to show protests in the central city of Isfahan and in Tehran’s Ekbatan highrise neighbourhood.

The activist news agency HRANA said in a posting that 244 protesters had been killed in the unrest, including 32 minors.

It said 28 members of the security forces were killed and more than 12,570 people had been arrested as of Friday in protests in 114 cities and towns and some 82 universities.

Meanwhile, CNN reported that the White House was in talks with billionaire Elon Musk about setting up SpaceX’s satellite internet service Starlink in Iran.

The satellite-based broadband service could help Iranians circumvent government restrictions on accessing the internet and certain social media platforms. Iranian activists say videos of protests have been delayed because of the curbs.

Separately, Germany issued a travel warning for Iran, saying there was a real risk of being arbitrarily arrested and sentenced to long prison terms, above all for dual nationals. Friday’s announcement raised the warning level for Iran travel, after Berlin strongly advised against it last month.

On Wednesday, an Iranian news agency said security forces had arrested 14 foreigners, including American, British and French citizens, for their involvement in the protests.