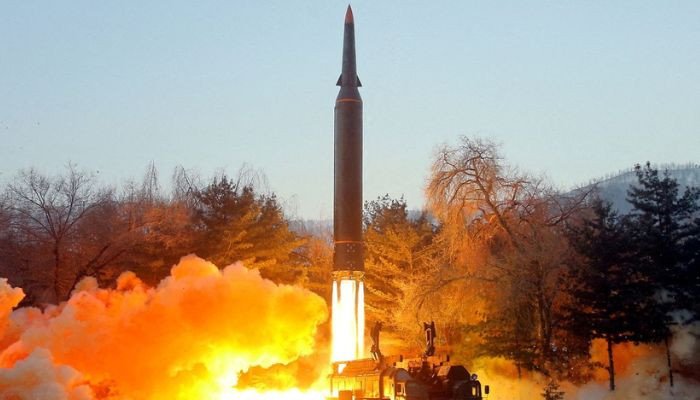 As the United Nations Security Council met to discuss Pyongyang’s Tuesday launch of an intermediate-range ballistic missile over Japan, North Korea blamed Washington for “escalating the military tensions on the Korean peninsula”.

The recent launches — six in less than two weeks — were “the just counteraction measures of the Korean People’s Army on South Korea-US joint drills,” Pyongyang’s foreign ministry said in a statement Thursday.

Seoul, Tokyo and Washington have ramped up joint military drills in recent weeks, including large-scale naval manoeuvers and anti-submarine exercises.

The United States will redeploy the nuclear-powered USS Ronald Reagan to waters east of South Korea for a second visit in less than a month, Seoul said Wednesday.

North Korea’s foreign ministry said in a statement carried by the official KCNA that this posed “a serious threat to the stability of the situation on the Korean peninsula”.

Early on Thursday, South Korea’s military said it had detected two short-range ballistic missiles launched from the Samsok area in Pyongyang towards the East Sea, also known as the Sea of Japan.

It appears to be the first time North Korea has fired missiles from Samsok, an official from Seoul’ Joint Chiefs of Staff told reporters.

He added that they look like a “different type of short-range ballistic missiles” from previous launches.

Tokyo also confirmed the launches, with defence minister Yasukazu Hamada telling reporters that it was important not to “overlook the significant improvement of (North Korea’s) missile technology”.

Pyongyang’s Tuesday firing of what officials and analysts said was a Hwasong-12 that travelled likely the longest horizontal distance of any North Korean test, prompted the United States to call for an emergency Security Council meeting.

Deputy Chinese ambassador to the UN Geng Shuang said North Korea´s recent launches were “closely related” to military exercises in the region conducted by the United States and its allies.

Geng accused the US of “poisoning the regional security environment”.

The spate of launches is part of a record year of weapons tests by isolated North Korea, which leader Kim Jong Un has declared an “irreversible” nuclear power, effectively ending the possibility of denuclearisation talks.

US ambassador to the UN Linda Thomas-Greenfield called for “strengthening” existing sanctions on North Korea, something China and Russia vetoed in May.

The council has been divided on responding to Pyongyang´s nuclear ambitions for months, with Russia and China on the sympathetic side and the rest of the council pushing for punishment.

Analysts say that Pyongyang has seized the opportunity of stalemate at the UN to conduct ever more provocative weapons tests.

Officials in Seoul and Washington have been warning for months that Pyongyang will conduct another nuclear test, likely after the Chinese Party Congress on October 16.

“At this point, for Kim to turn back and halt provocations would seem counterproductive to his interests, not to mention the amount of resources squandered to conduct these weapons tests,” Soo Kim, an analyst at the RAND Corporation, told AFP.

“We are indeed in a cycle of weapons provocations. What’s left, essentially, is an ICBM test and potentially the long-awaited seventh nuclear test.”