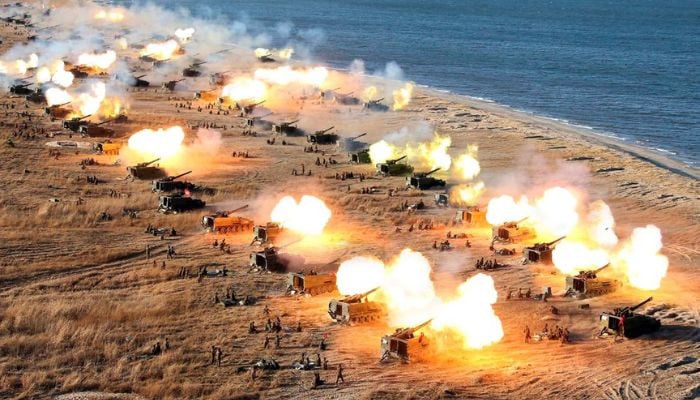 SEOUL: North Korea said on Tuesday it has never had arms dealings with Russia and has no plans to do so, its state media reported, after the United States said North Korea appears to be supplying Russia with artillery shells for its war in Ukraine.

Kirby said North Korea was attempting to obscure the shipments by funnelling them through countries in the Middle East and North Africa and that Washington was monitoring to see whether the shipments are received.

A North Korean defence ministry official called the allegations a rumour and said Pyongyang has “never had ‘arms dealings’ with Russia” and has “no plan to do so in the future.”

“We regard such moves of the US as part of its hostile attempt to tarnish the image of the DPRK in the international arena by invoking the illegal ‘sanctions resolution’ of the (UN Security Council) against the DPRK,” the official said in a statement carried by the KCNA, referring to the North by the initials of its official name.

Any arms aid would be a further sign of deepening ties between Moscow and Pyongyang as Russia’s isolation over its war in Ukraine has grown.

North Korea was one of the only countries to recognise the independence of breakaway Ukrainian regions, and it has expressed support for Russia’s proclaimed annexation of parts of Ukraine.

“North Korea is clearly using the Ukraine war to tighten its relations with Russia,” Victor Cha, of the US-based Center for Strategic and International Studies, said in a statement.

Kirby’s comments suggest Washington will watch the shipments but will not intercept them given it does not believe it will impact the war significantly, he said.

However, the United States has the capacity to track shipments, and interception could be an option given that Russia wields a veto at the UN Security Council and can block any measures there, Cha added.

“To avoid any military altercations, US authorities could coordinate with willing countries to detain the cargo at customs to prevent their making it to the battlefield,” he said.