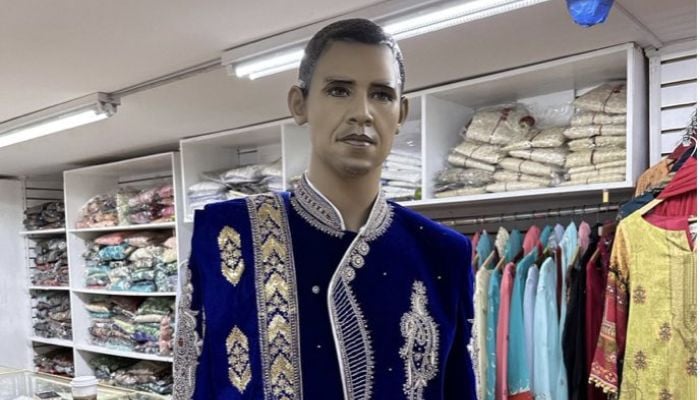 In another bizarre social media viral post, a picture shows a mannequin in an Indian clothing store that closely and strangely resembles former US president Barack Obama.

The mannequin is seen wearing a sherwani, a prominent and popular clothing item worn usually by grooms in Pakistani and Indian weddings. The outfit usually has heavy embroidery and a stole with it.

The “Obama” mannequin is in a royal blue sherwani with a matching stole. The Twitter post’s caption read: “Obama’s Diwali party outfit.”

The post has amassed over 5,000 likes and several retweets. People have made hilarious comments, some sharing pictures of the Obama family celebrating Diwali.

“Ngl (not going to lie) that colour is a bit too much for him,” a user pointed out.

“Looks like the result of Dall E 2 prompt,” said another.

“Plays cards, eats paan and launches drone attacks in the spirit of the festive period,” a user wrote.

Another user said, “Welcome to Chandni Chowk”, pointing to a popular locality in India’s capital where mannequins are usually placed outside shops.