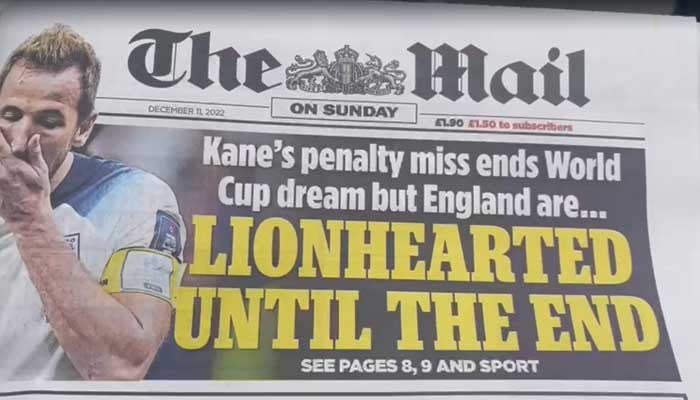 LONDON: Britain’s largest circulating newspaper The Mail on Sunday (MoS) published an apology addressing Prime Minister Shehbaz Sharif in its 1 million print editions as part of the settlement deal to apologise online and in its print edition after the global removal of the false and defamatory article by reporter David Rose.

The printed apology is available at thousands of supermarkets and newsagents across the United Kingdom as per the agreement that the paper’s parent company Associated Newspapers Limited (ANL) will first apologise online on Thursday (December 8) and then print the same apology on the following Sunday (December 11).

In its printed apology, The Mail on Sunday stated that all its journalists observe the Editor’s Code of Practice and The Mail is a member of the Independent Press Standards Organisation (IPSO). “We aim to correct any errors as promptly as possible,” the apology read.

The online readership of the paper is estimated at tens of millions every month globally and around 25 million unique visitors read via its websites in the UK.

The article by David Rose titled “Did the family of Pakistani politician who has become the poster boy for British overseas aid STEAL funds meant for earthquake victims, asks David Rose” was deleted on Thursday prior to Daily Mail publicly announcing it has apologised and settled the case with the premier and his son-in-law Imran Ali Yousaf.

The Associated Newspapers published the false and defamatory article by David Rose on July 14, 2019, after the reporter especially visited Pakistan during the Pakistan Tehree-e-Insaf (PTI) government ahead of the publication. The defamatory article was published on two pages in the middle of a 100-page print edition.

PM Shehbaz’s lawyers had asked the paper, as part of the settlement deal, to print the apology at a prominent place and that’s the reason why it has published the apology and retraction of the false allegation on page two of the print edition. The front page has a full spread on Prince Harry and his wife Meghan Markle.

The Mail on Sunday’s apology and clarification to PM Shehbaz is copied from the Daily Mail and Mail Online’s published online versions.

The Sunday print edition of the apology, published following the global removal of the defamatory and fake article by David Rose, reads: “In an article concerning Mr Shahbaz Sharif entitled ’Did the family of Pakistani politician who has become the poster boy for British overseas aid STEAL funds meant for earthquake victims’ published on 14 July 2019 we reported on an investigation by Pakistan’s National Accountability Bureau into Mr Sharif and suggested that the money under investigation included a not insubstantial sum of British public money that had been paid to the Punjab province in DFID grant aid.

“We accept Mr Sharif has never been accused by the National Accountability Bureau [NAB] of any wrongdoing in relation to British public money or DFID grant aid. We are pleased to make this clear and apologise to Mr Sharif for this error.”

As part of the agreement, the ANL has removed the defamatory article by David Rose from all its websites. The publishing company apologised to the premier and his son-in-law Yousaf in a massive defamation victory at the UK High Court on each and every count of corruption.

By removing the defamatory article and printing the apology, the paper’s owners have accepted that the prime minister was not involved in stealing funds from that Department for International Development (DFID) grant for Pakistan; he was not a beneficiary of money laundering of tens of millions of pounds; he was not involved in embezzlement whilst being Chief Minister of Punjab or misuse of public office; he was not involved in receiving corrupt payments in the forms of kickbacks or commissions from government-run projects.

PM Shehbaz received a clean chit from the National Crime Agency in September 2021 in a high-profile criminal investigation which was done by the UK sleuths in coordination with the Assets Recovery Unit (ARU) of Pakistan, under former PM’s aide for accountability Shahzad Akbar.