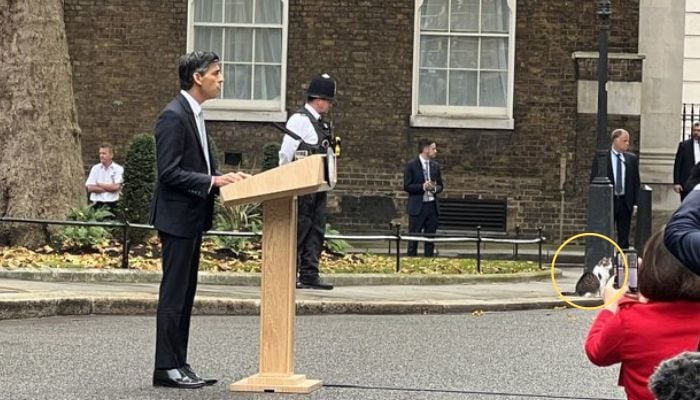 Larry the Cat, who the British thought could be the next prime minister after Boris Johnson resigned, is back again as Rishi Sunak is appointed UK’s new leader after Lizz Truss’s resignation.

At the time of Johnson’s resignation, videos circulating on social media showed Larry wandering around 10 Downing Street in London waiting at the gate of the Prime Minister’s Office. “Personally I think we should vote Larry as prime minister,” a social media user had said.

Larry the Cat soon joined Twitter and the account hilariously covers the political crisis in the UK.

Pictures of Larry attending Sunak’s speech at Downing Street have now gone viral. The cat is seen sitting at a distance as Sunak makes his address.

“My old pal Faisal Islam made sure to get an angle featuring the real boss around here,” Larry posted.

“Love that the lady taking a photo on her phone is photographing Larry, not Rishi,” a user noted.

“Looking good, as always, Larry!!!” a user complimented the “boss”.

Many expressed their love for the adorable kitty.

“The policeman keeping a good watchful eye over you there Larry,” a user joked.

“You really are the main man in Downing Street,” chimed in another.