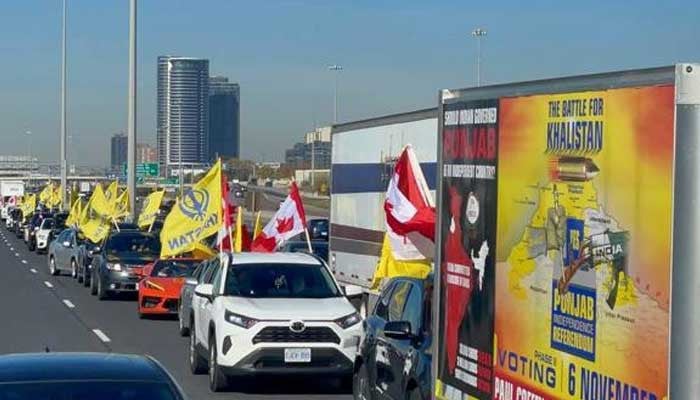 TORONTO: Over 8,000 Sikhs participated in “1984 Sikh Genocide” Remembrance Truck and Car Rally organised by the secessionist group Sikhs For Justice (SFJ), which at one point brought the traffic to a standstill and blocked the highways leading to Toronto downtown.

The main highway and dozens of linked roads were choked as hundreds of iconic Canadian trucks drove on the highway carrying flags of Khalistan and slogans of ‘1984 Sikh Genocide’. Slow moving vehicles with flags travelling slowly on the highway created long lanes of traffic. The trucks carried banners that read “8 days old Sikh infant burnt alive by Hindu mobs’. The trucks also carried symbolic coffins to internationalise the genocide of Sikhs in 1984.

Gurpatwant Singh Pannun, the SFJ General Counsel and founder, said that 1984 Sikh Genocide is one of the biggest crimes against humanity where an attempt was made to erase Sikh identity and religion.

“Sikhs await justice and the real justice will be Sikh homeland of Khalistan. Sikhs want liberation of Punjab from Indian occupation through a democratic referendum which will allow Sikhs to vote on question of future association of Punjab with India,” Pannun said demanding justice for the community.

Pannun added that the RSS-BJP regimes is fuelling a narrative which will lead to another genocide of the community in India.

“The successive Indian regimes used violence against Sikh’s sovereignty to silence the independence movement, but now is the time the community must vote in Referendum to have an independent Sikh homeland Khalistan,” the Sikh leader spoke during the rally.

In the aftermath of Indira Gandhi’s assassination on October 31, 1984, organised attacks were carried out with the active connivance of police and administration against the Sikh population throughout India with the intent to destroy the community.

The violence against the Sikhs’ continued unabated for several days in more than 100 cities across India resulting in over 30,000 deaths, thousands of women raped, hundreds of Gurudwaras burnt down, and more than three million members of the community displaced.

Reports by several international human rights organisations and the most recent report “Mass Violence Against The Sikh People In India: The Events of November 1984 – A Case of Genocide and Crimes Against Humanity (updated October 2022)” authored by the UK based Global Diligence LLP, an international law and human rights compliance group, makes it clear that the intentional nature, scope and scale of the violence against Sikhs in November 1984 was genocide.