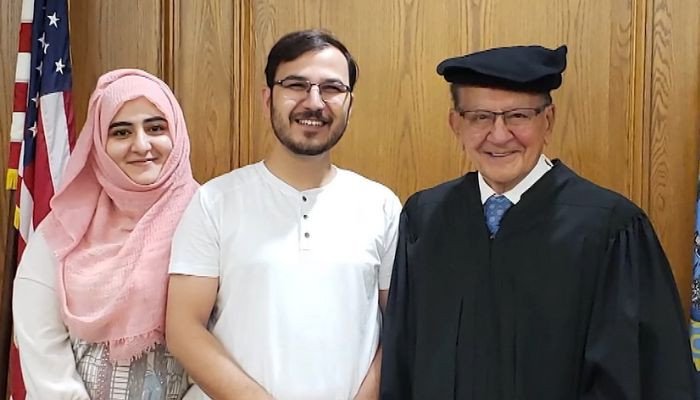 A chief municipal judge in Providence, Rhode Island, Judge Frank Caprio — who is popular on social media for his compassion and empathy towards fined individuals undergoing trial — has now become an “honorary Pakistani” after receiving a special gift from a Pakistani couple living in the US.

Judge Caprio from “Caught in Providence” has been winning many hearts all over the world, including in Pakistan.

Recently, a Pakistani resident Jawad Ammar got a chance to meet the jurist after being charged with a parking ticket. Ammar told the court that it was actually his wife who had wrongly parked the car as she did not know it was a prohibited area.

Judge Caprio called the wife on the stage and pointed out a red-light violation to her. She said she was not familiar with the city because she had recently moved in.

Jokingly, Ammar took the blame for her mistake saying it was his fault she had to move to the city after marriage.

“But it’s worth it, you have got a good man, right?” Judge Caprio asked as he chuckled.

Judge Caprio shared that he had received “wonderful letters” from Pakistan after which the couple told him that people in Pakistan loved him and wanted to meet him.

“We hear a lot of good things about Pakistan,” he remarked.

The wife added that she missed Pakistan because of the food but had not gotten the time to go eat.

The trial ended with the couple being fined $65. After the challan, Ammar requested a picture with the famed judge.

Judge Caprio immediately agreed and warmly welcomed them. After the picture, Ammad offered him a Peshawari cap and helped him wear it too.

“I have just been baptised by a Pakistani,” Judge Caprio exclaimed garnering laughter from those in the room.