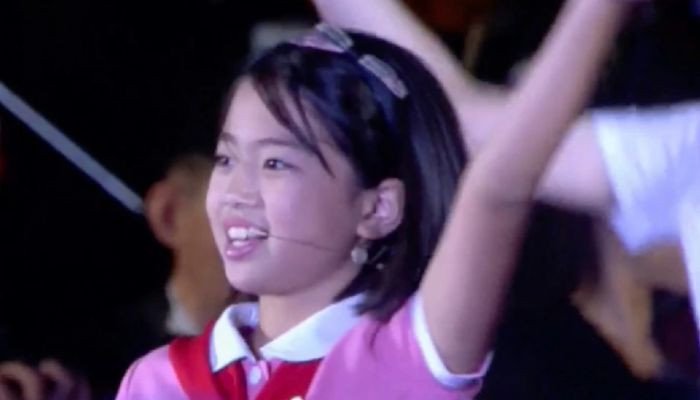 People are wondering if Kim Jong-un’s secret daughter finally got pictured, pointing toward a little girl who appeared with the dictator in a recent stage show.

She was seen at North Korea’s National Day celebrations earlier in September and identified as Kim Ju-ae by experts.

While she was among the other children who performed a song for the Supreme Leader and his wife, Ri Sol-ju, something about her stood out to experts.

An analyst mentioned on the InDPRK blog that Sol-ju reached out to this girl specifically after the show ended, according to a report by The Sun. Writing under the alias Samhero, they noted that she talked to the girl personally and even put her hand on the girl’s back.

They said that while the other children were excited around Jong-un and surrounded him, she stayed calm.

In 2013, Jong-un’s friend Dennis Rodman confirmed that the leader had a newborn daughter. Today, the girl would be nine years old, which is the same age as the girl in the video.

She is believed to be the ruler’s middle child.

Samhero also pointed out that the camera turned to her again and again during the performance. She was also the only one seen wearing white socks and open hair.

Jong-un’s sister Kim Yo-jong was seen wiping her tears during the performance. Some even said that the girl was absent in the repeated show that happened the next night.

Michael Madden, an expert on the North Korean elite, said that even Sol-ju was seen on TV before she was recognised as Jong-un’s family.

“Madame Ri appeared on North Korean television on several occasions as a singer, sometimes as a soloist, at concerts,” The Sun quoted him as saying.

He added that making his daughter public could be risky for Jong-un. When he was a child himself, he was not allowed to meet anyone. Only the top North Korean elites knew he existed.

He said that children were prone to being kidnapped and used as leverage over the leader instead of a coup or insurrection against him.

Madden, who is a fellow of The Stimson Center in Washington DC and also runs the North Korea Leadership Watch website, said it was possible that the Supreme Leader had even more children.

The ruling regime has remained tight-lipped about the first family. North Koreans got to know about Jong-un in 2010 just a year before his father died.