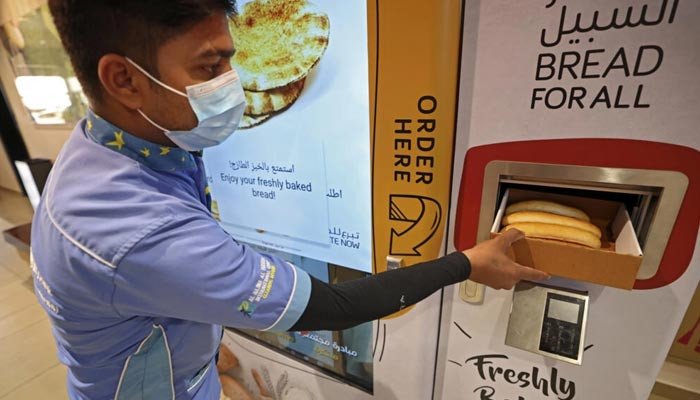 DUBAI: With the cost of living surging, free hot bread distribution for the poor has been introduced in Dubai, a rich Gulf emirate where millionaires rub shoulders with hard-working migrants.

The city of skyscrapers soaring above the desert, which imports almost all of its food, has been impacted by rapidly rising consumer prices, a global trend exacerbated by Russia’s invasion of Ukraine.

The machine has a credit card reader — for donations not payment.

“A friend told me there was free bread, so I came,” said Bigandar, a young man from Nepal who works at a car wash, not wanting to give his full name.

Like millions of Asian migrants, he dreamt of making a fortune in the United Arab Emirates.

He headed for Dubai, a city that has earned a reputation for conspicuous consumption and excess.

According to government figures from the Dubai Statistics Centre, the food price index, which tracks the monthly change in the cost of a basket of food commodities, rose by 8.75%  in July, year on year.

The cost of transport has jumped by more than 38%.

The bread machines are the initiative of a foundation set up by the ruler of Dubai, Sheikh Mohammed bin Rashid Al-Maktoum.

“The idea is to go to disadvantaged families and workers before they come to us,” said the foundation’s director, Zeinab Joumaa al-Tamimi.

Anyone in need can now get hot bread just “by pressing a button”, she said.

The oil-rich UAE has a population of nearly 10 million people, 90% of them foreigners, many labourers from Asia and Africa.

Dubai, the commercial heart of the UAE, relies on this army of workers to build skyscrapers and for the service sector, from real estate to luxury tourism, on which it has built its reputation.

Bigandar, who has worked there for the past three years, says that for each vehicle he cleans he earns three dirhams, or 81 US cents.

“My employer covers housing and transportation, but not food,” he said.

In a sign of the growing difficulties faced by migrant workers, a rare strike was led in May by delivery men demanding better wages in the face of rising fuel prices.

In July, the authorities announced the doubling of social aid, but only for the handful of Emirati families with incomes below 25,000 dirhams per month ($6,800), considered to be disadvantaged households.

This aid programme does not include foreigners.

“Because of inflation and rising interest rates, there are many people whose wages are low and who, with the rising cost of living, can no longer meet all their needs,” said Fadi Alrasheed, a Jordanian businessman who has lived in Dubai for 20 years.

According to the UN World Migration Report, the UAE is home to nearly 8.7 million migrants, mainly from India, Bangladesh and Pakistan.

Henley and Partners, a London-based investment migration consultancy, estimates there are more than 68,000 millionaires and 13 billionaires in Dubai, ranking the city the 23rd richest in the world.