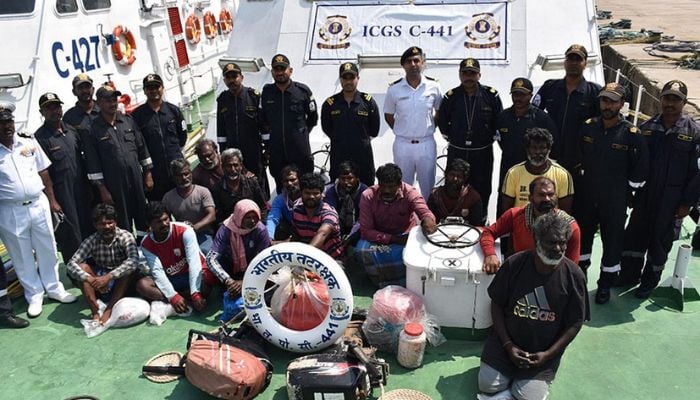 Edison Davis and Augustine Nemus made a commitment to their families that they would return for Christmas when they left India’s southern coast on November 27 to go fishing. However, they remained silent for several weeks.

The two men travelled in a deep-sea boat for over three weeks to fish in the Arabian Sea with a group of 15 other fishermen, reported the BBC.

At first, the families didn’t freak out because they were accustomed to the fishermen spending days at sea.

However, the families started to worry when Christmas passed and the guys still had not come home. They still had vivid memories of Cyclone Ockhi, a cyclone that devastated India’s southern coast in 2017 and claimed the lives of numerous fishermen.

They questioned if any of their family members had had a similar situation. But on January 2, the fishermen finally went back home.

Where had they been?

The fishermen had been stranded on a secluded island in the British Indian Ocean for days before being rescued by a passing British ship after their boat’s engine failed.

The fisherman had devised creative means of surviving, including sipping water from coconuts they had found on the island, as they had no idea when they would be rescued.

The fishermen had departed from Thengapattanam harbour in the southern state of Tamil Nadu aboard a wooden boat known as the Chrisha Mol. But on the seventh day, the boat’s engine failed, and it started to float farther out to sea. Five days were spent like this before a Sri Lankan boat arrived.

“The crew pulled our boat to a place where the water was around 8m (26ft) deep. We thought we were safe and we dropped anchor there,” Nemus told the BBC.

The crew instructed the fishermen to send radio messages asking for assistance from Indian fishing boats in the area since Sri Lankan fishing vessels are not permitted to enter Indian waters.

After three days, a boat answered.

Sadly, its engine was not strong enough to pull the heavier Chrisha Mol to shore. The owner of Chrisha Mol removed the boat’s gearbox and departed with the Indian boat to get it repaired once they arrived at land.

In order for the fishermen to securely rope their boat and stop it from drifting, the crew also left their anchor behind.

On December 19, nevertheless, an unexpected wind blow forced the rope on one of the boat’s anchors to break. Three days later, the second rope also snapped, and the boat started to drift once more.

Then, according to Davis, nine fishermen boarded a dinghy, a small boat they had dragged along, loaded it with rice and other supplies, and they sailed for the island.

The five crew members who had been waiting were then retrieved later, although by that time the boat had drifted farther away.

The seven fishermen arrived at the small island, which Davis claims was unoccupied. They were now faced with a new obstacle: how would they continue to exist while their resources were about to run out?

They barely had enough food to last them ten days and there was no drinkable water available.

The fisherman then looked to nature for assistance. They cooked with seawater. They hunted for coconuts and drank the water from them when they became thirsty. They laid down plastic sheets on the ground, caught the raindrops, and put the water in cans after it rained.

On December 27, five days later, they spotted a British ship far from the island. The delighted fishermen began calling for assistance by tying a bright red cloth to a tree branch.

The fisherman took their first shower on board the ship. The crew on the ship fed them, gave them clothes to change into, and assessed their health.

The ship turned the fishermen over to the Indian Coast Guard at Vizhinjam port on the southern Indian coast, on January 2. It took a day to confirm their identities and finish the necessary paperwork before they could be reunited with their family.