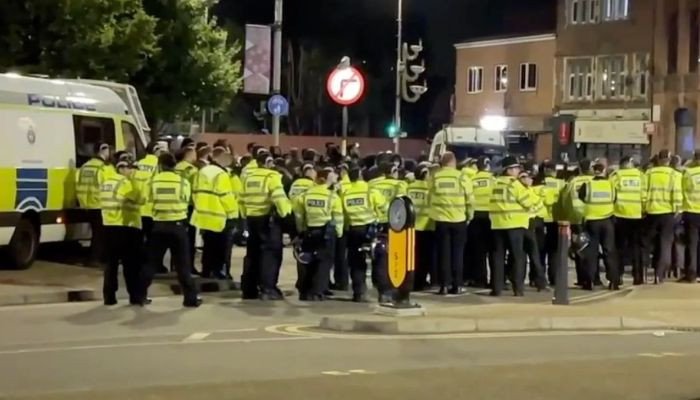 Over the last few weeks, tensions between Muslim and Hindu communities have come to a head in two places within the Midlands region of the UK: Leicester and Smethwick. With footage depicting marches and demonstrations dominating social media, it is important to understand what factors precipitated these tensions.

According to locals, these clashes are unprecedented within these communities, which have long been unified in their struggles against racism and religiously aggravated hate crimes.

As will be shown, there are a number of different factors relevant to each case, all of which likely exacerbated Muslim-Hindu tensions. But it is clear that a driving factor was the Hindu nationalistic ideology of Hindutva, which appeared to be shared by some of the Leicester demonstrators and it was opposition to this ideology in Smethwick that led to protests.

Tensions culminated first in Leicester, with at least 47 people having been arrested to date. Here is the timeline of events:

India beats Pakistan in the Asia Cup cricket match. Crowds gathered, with one police officer and another person assaulted. Police state the victim was not a Muslim but a Sikh, assaulted by a man supporting the same team. But footage has also emerged of people wearing Indian national cricket shirts shouting “Pakistan Murdabad.”

Hundreds of (allegedly) Hindu men marched through Green Lane Road as part of an unplanned protest, some of whom were masked and carrying weapons. Eyewitnesses say some were chanting “Jai Shri Ram,” which has also been captured in video footage. Other footage also shows someone tearing down a flag from a Hindu temple and another such Hindu flag being lit on fire.

During this time, a significant amount of disinformation was shared on social media, which fuelled tensions between Muslims and Hindus in Leicester. For example, The Telegraph reported police confirmation that the claim that Hindu men had attempted to kidnap a Muslim girl “did not take place” and that attacks on mosques were baseless. But the wide dissemination of such claims would have naturally fostered greater suspicion and distrust amongst the communities who largely live side by side in peace.

Besides the factors of the India-Pakistan cricket match and disinformation, it has also been claimed that ‘outside’ influences have played a role. The first outside influence is people from other cities. The police found that many people who have been arrested were not from Leicester but from other cities, namely Birmingham.

However, tensions within Birmingham, as in Leicester, are likely inspired by the second outside influence: Hindutva.

Indeed, Birmingham was due to be visited this week by Sadhvi Ritambhara, the leader of the women’s wing of the Vishwa Hindu Parishad (VHP), as part of her tour of Hindu temples across England. She has been accused of inciting hatred against Muslims in India and of sowing communal animosity. Sam Tarry MP consequently appealed to the Home Secretary to stop Ritambhara’s tour on account of her Islamophobia. Therefore, the anticipation of and calls to ban her visit, which appear to have been successful, would have exacerbated tensions within Birmingham and elsewhere where she had been due to speak.

The “Jai Shri Ram” chant heard on the 17th of September is a greeting or expression of adherence to Hinduism. But, as well as having been historically used by Hindu nationalist groups, like the VHP and the ruling Bharatiya Janata Party (BJP), it has become associated with Islamophobic hate in India.

Along with polarisation between Muslims and Hindus, Islamophobia has increased exponentially since the Modi-led BJP government came to power in 2014, which I have covered in greater detail elsewhere. It has also been alleged that, following the cricket match, there were calls of “Pakistan Murdabad,” a Partition-era political slogan advocating for the destruction of Pakistan.

While the clashes in Leicester were led by some Hindu nationalists, some Muslims also stoked tensions by tearing down and burning symbols of Hinduism. So it would be wrong to suggest that one side was entirely to blame and another was entirely innocent.

The second place where tensions have escalated in Smethwick, a town four miles outside of Birmingham. On the 20th of September, around a hundred (allegedly) Muslim men gathered outside the Durga Bhawan Temple in Smethwick. Footage shows members of the crowd shouting at the temple and making inappropriate gestures. Some people also threw fireworks at police officers.

With no recent reports of prior clashes in Smethwick, it has been suggested that the Muslim-Hindu animosity in Leicester had simply “spread.” While events in Leicester may have exacerbated tensions further, the consensus appears to be that this was a planned gathering to protest the invitation of an extremist to speak at the temple.

However, there is confusion amongst different media outlets about who was actually invited, or at least whether this person was indeed an extremist or not. The Telegraph reported that Hindu faith leaders reassured people that the speaker, who they named “Ritambra Bibi,” was not a nationalist but a charity worker whose tour was “cancelled due to ill health.” In contrast, The Daily Mail said that this was a protest in response to rumours that ‘Sadhvi Ritambhara’ had been invited to speak at this temple, the controversy around whose tour I cited above.

This uncertainty is put to bed by the poster for Ritambhara’s UK tour schedule, which clearly states that the venue for her talk in Birmingham, due to be held on the 20th of September, was at the Durga Bhawan Temple. Though the behaviour of some of the protestors cannot be justified, their concern was thus more than a rumour.

It should be noted here that Maulana Nasir, Imam at the Abrahamic Foundation, has since appeared outside the temple to say that the organisers were receptive to concerns among Muslims and cancelled the event prior to these demonstrations last week. While Nasir said he was initially upset they had invited Ritambhara, he said the organisers recognised their mistake.

Though Hindutva existed long before this current BJP government and thus has likely manifested in the UK before, it has not appeared within the public discourse, nor in the media, nearly as much as Islamism.

So, while these are by no means simple or one-dimensional events, and criminal behaviour by both sides must be condemned, there can be no doubt that Hindutva was a motivating factor behind recent Muslim-Hindu tensions in the Midlands.

The writer is a researcher and is currently undertaking a PhD. She tweets @MaryFloraHunter.