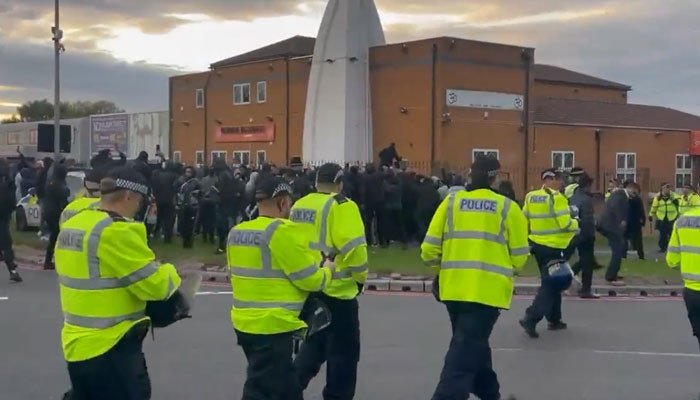 The tensions between Hindus and Muslims that broke out after the August 28 hi-octane Pakistan vs India match in the recently concluded Asia Cup 2022 have spread to Birmingham, England after weeks of unrest in the multicultural city of Leicester.

The violence has made headlines in India and Pakistan as well as the UK, and dozens have been arrested so far for involvement in the street clashes between members of the Hindu and Muslim communities.

Community leaders and local politicians appealed for calm on Tuesday after a group of youngsters staged a protest in Birmingham. The police have advised youngsters to stay cautious and avoid any row over social media as well.

They said that there seems to be no planning behind the unrest, but legal action will be taken against elements involved in the matter.

Meanwhile, leaders of Hindu and Muslim communities gathered Tuesday morning at the steps of a mosque.

Pradip Gajjar, the president of the city’s Iskcon Leicester Hindu temple, read out a joint statement saying they were “saddened and heartbroken to see the eruption of tension and violence”.

“Physical attacks on innocent individuals and unwarranted damage to property are not part of a decent society and indeed not part of our faiths,” he added, according to a video posted by the local Leicester Mercury newspaper.

The Leicester Mercury stressed that “the issues behind the unrest… are far more complex than just a cricket match”.

Police said on Monday that 47 people had been arrested in relation to the unrest, which began the night of August 28 and continued this month.

“The impact this disorder is having on our local communities is not acceptable,” Leicestershire Police said on Monday.

“We will not tolerate violence, disorder or intimidation in Leicester and we continue to call for calm and dialogue.

“Our police operations and investigations continue with rigour and at scale.”

Police said those arrested were men, mostly in their teens and 20s, and faced charges such as possession of offensive weapons or firearms, violent disorder and making threats to kill.

Police have obtained extra powers to stop and search anyone in certain areas and take minors back to their homes. They have urged against “circulating speculation on social media”.

A 20-year-old local man has been jailed for 10 months for possession of an offensive weapon.