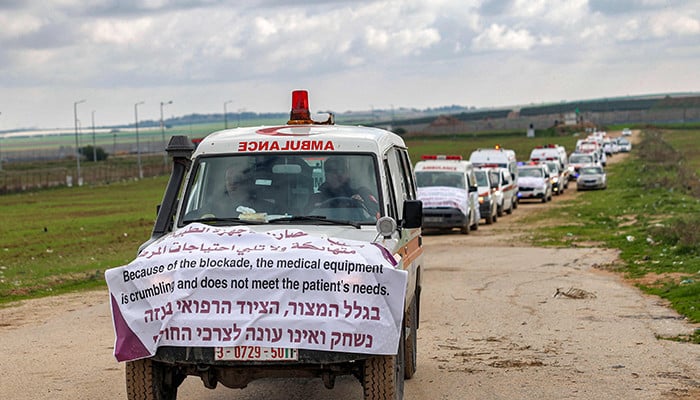 GAZA CITY: Gazans drove a convoy of ambulances along the Israeli border on Monday to protest import restrictions on medical equipment, which the health ministry in the Palestinian enclave warned puts patients at risk.

Israel bans the transfer of goods to Gaza that it deems could be used for military purposes, as part of a blockade it has imposed on the coastal territory since the armed group Hamas took power in 2007.

“Preventing the entry of medical devices means the slow death of Gaza patients,” read a banner spread across one of around 25 ambulances used in the border rally.

Another poster, in Arabic, Hebrew and English, warned: “medical equipment is crumbling”.

Ashraf al-Qudra, a spokesman for the health ministry, said the demonstration followed Israel preventing four mobile X-ray machines from entering Gaza, in addition to equipment used to treat stroke patients and those in intensive care.

Israel refuted the criticism and in a statement said Hamas and other militant groups were “systematically and cynically taking advantage of humanitarian and civilian shipments of equipment and goods for terrorist purposes.”

COGAT, the Israeli defence ministry body responsible for Palestinian civil affairs, said X-ray machines were on its list of items which could have a military purpose but medical requests were considered.

Over the past year Israel has “approved dozens of requests for X-ray machines shipments into the Gaza Strip, including both new machines and spare parts for existing ones,” COGAT said.

Densely-populated Gaza is home to some 2.3 million residents, the majority of whom live in poverty according to the World Bank.