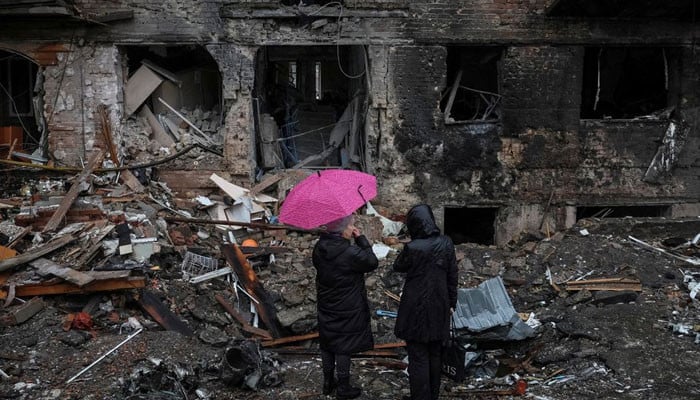 Ukrainian authorities on Friday gradually restored power, aided by the reconnection of the country’s four nuclear plants, but millions of people were still in the dark after the most devastating Russian air strikes of the war.

President Volodymyr Zelenskiy pleaded with Ukrainians to use energy sparingly. “If there is electricity, this doesn’t mean you can turn on several powerful electrical appliances at once,” he said in an evening video address.

He said 6 million people were still without power, half as many as there were in the immediate aftermath of the Russian assault on Wednesday. The attacks caused the worst damage so far in the conflict, leaving millions of people with no light, water or heat even as temperatures fell below zero.

National power grid operator Ukrenergo said several hours earlier that 30% of electricity supplies were still out, and asked people to cut back on their energy use. “Repairs crews are working around the clock,” it said in a statement on Telegram.

Zelenskiy went to the town of Vyshhorod just north of Kyiv on Friday to look at a four-storey building damaged by a Russian missile. He also visited one of the many emergency centres that have been set up to provide heat, water, electricity and mobile communications.

“Together we will be able to go through this difficult path for our country. We will overcome all challenges and we will definitely win,” he said in an earlier video statement.

Moscow says the attacks on basic infrastructure are militarily legitimate, and that Kyiv can end the suffering of its people if it yields to Russian demands. Ukraine says attacks intended to cause civilian misery are a war crime.

The European Union will step up efforts to provide Ukraine with support to restore and maintain power and heating, the head of the European Commission said.

Russia insists it does not target civilians in the “special military operation” it launched in late February. International human rights officials say that is difficult to reconcile with attacks on civil infrastructure.

“Millions are being plunged into extreme hardship and appalling conditions of life,” UN human rights chief Volker Turk said in a statement.

Moscow says it launched its operation in Ukraine to protect Russian speakers in what President Vladimir Putin has called an artificial country carved from Russian territory.

“Russia is first and foremost about people, their culture, their traditions, their history, which is passed down from generation to generation and absorbed with mother’s milk,” he said during a televised meeting with mothers of soldiers.

Putin said he shared the women’s’ pain, telling them that “the main guarantee of our success is our unity”.

Ukraine and the West contend Putin has no justification for what they say is a war of conquest.

British Foreign Minister James Cleverly visited Ukraine and pledged millions of pounds in further support, his office said on Friday. Cleverly, who met Zelenskiy on the trip, condemned Russia for its “brutal attacks” on civilians, hospitals and energy infrastructure.

Kyiv says Russia has incessantly shelled Kherson, the southern Ukrainian city that it abandoned earlier this month. The head of the local administration said on Friday that 15 people had been killed and 35 wounded in the last six days.

Although the EU is developing more sanctions to slap on Russia, the 27-nation bloc is split over a Group of Seven proposal to cap Russian seaborne oil prices. A meeting to discuss the idea, scheduled for Friday, was canceled, EU diplomats said.

The International Atomic Energy Agency said the three nuclear plants on Ukrainian-held territory had been reconnected to the grid, two days after the attacks forced them to shut for the first time in 40 years.

The fourth station, in Zaporizhzhia, is in Russian-controlled territory. It came back online on Thursday.

Kyiv says the war reflects what it sees as malice towards Ukrainians dating back to Soviet and imperial days.

This week, Ukrainians will observe the 90th anniversary of the Holodomor famine.

In November 1932, Soviet leader Joseph Stalin dispatched police to seize all grain and livestock from newly collectivised farms, including the seed needed to plant the next crop.

Germany’s Bundestag parliament is expected to vote overwhelmingly to recognize it as a genocide, following similar moves this week by Romania, Moldova and Ireland.

Russia rejects accusations that the deaths were caused by a deliberate genocidal policy, saying Russians and other ethnic groups had also suffered because of the famine.