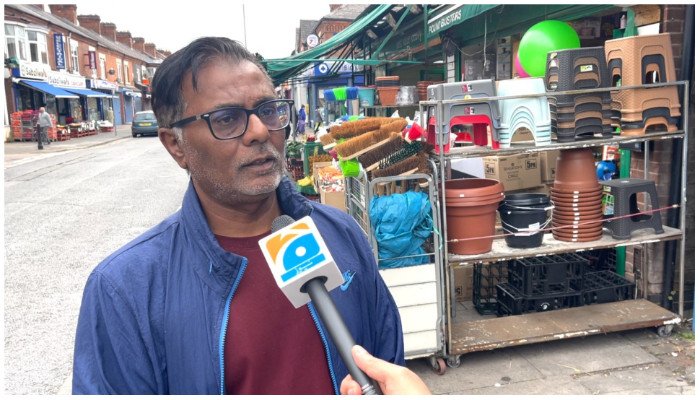 LEICESTER: Former Leicester City mayor Abdul Razak Osman has blamed Hindutva extremism for causing Hindu-Muslim violent clashes and unrest in the city of Leicester, one of the most multi-cultural cities in Britain.

In an interview with Geo.tv, the Indian-origin former Leicester city mayor said he had “no doubt” that certain elements in Leicester linked with Rashtriya Swayamsevak Sangh (RSS) and Bhartiya Janata Party (BJP) had brought an extremist, hateful, and hostile ideology to the town”.

He added that the ideology led to a group of youth chanting “death to Pakistan” slogans through a hostile march on the streets after the India-Pakistan clash in the Asia Cup, which took place on August 28 in Dubai, United Arab Emirates.

Osman has lived and worked in Leicester for over four decades and was one of the longest-serving councillors until a few years back.

He said: “A group of men from the local Hindu community attacked a Muslim boy over some minor issue. Those involved in the attack were boys from the Daman/Goa community who have arrived in the UK recently on Portuguese passports. That news spread through social media. Then the same group came to Green Lane Road and attacked another boy on the next street.”

He said that similar incidents had been going on before the August 28 Pakistan-India cricket match as well. The old settled Indian community is not involved in these attacks but there has been tolerance towards extremist Hindutva ideology and that’s been happening for nearly 10 years.

Violence and unrest happened after weeks of growing tension between parts of the Hindu and Muslim communities in the city after a cricket match between India and Pakistan. A total of 47 people have been arrested since then for taking part in attacks.

Footage shared on social media shows groups of masked men throwing bottles and rocks at each other and at the police. One footage showed hundreds of men marching through the streets chanting “Jai Shri Ram”.

The former lord mayor said the same group of men has been marching on the streets whenever India won a match against Pakistan but this time “they started chanting ‘death to Pakistan’ and that created the problem because the local Muslim youth groups decided to respond to this kind of provocation”.

Osman said the local police and authorities are fully aware of the extremist threat that exists in the city but did nothing to deal with it, including on the days when the violence broke out.

He added: “The situation remains tense and fragile. It’s not under control. There is fear in all Asian areas of the city. I have spoken to many people and they are not coming out [of their homes] at night. This area needs investment. There is a lack of facilities and youth don’t have jobs and hopes.”

The former Leicester mayor called on all communities to stand together to “defeat the influence of extremism coming from India via media and hate preachers. Those involved in unrest on the streets came from outside the city in coaches and cars. There are fears of copycat riots if the situation is not controlled and if those involved in attacks are not punished.”

On Thursday, the New Home Secretary Suella Brakeman MP tweeted she had visited the city to meet the local police and community leaders to discuss the latest situation and steps being taken to protect the communities.

Leaders of the Hindu and Muslim communities in Leicester have issued a joint appeal for harmony in the city.

Pradyumna Das, President of the city’s ISKCON Temple, read out a statement joined by community leaders outside a mosque in the city to express “sadness” over the violence which escalated over the weekend.

“Our message to anyone that sows disharmony between us is clear: we will not let you succeed. We ask all to respect the sanctity of religious places, both mosques and mandirs alike — whether provocation with loud music, flag bearing, derogatory chants or physical attacks against the fabric of worship. This is not acceptable nor upheld by our faiths,” the statement said.