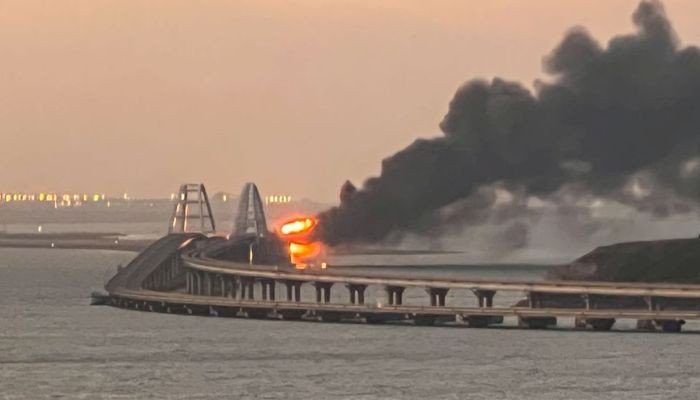 A fuel tank was on fire on the Kerch bridge in Crimea early on Saturday, Russia’s RIA state news agency said, while Ukraine’s media reported an explosion.

Traffic was suspended on the road-and-rail bridge, which opened in 2018 and designed to link Crimea into Russia’s transport network.

“A fuel tank is on fire on one of the sections of the Crimean bridge,” the agency said, citing a regional official, but without stating the cause.

“The shipping arches are not damaged.”

Ukrainian media said the blast on the bridge happened at about 6am.

Reuters could not independently verify the reports.

Russian President Vladimir Putin unveiled the bridge in 2018, after Crimea was annexed from Ukraine in 2014, bringing sanctions and a deterioration in ties with the West.

In September, Russia announced the annexation of the provinces of Donetsk, Luhansk, Kherson and Zaporizhzhia after staging referendums that Kyiv and the West say were phoney exercises held at gunpoint.

Putin signed a decree on Friday that establishes a new operator for the Exxon Mobil Corp-led Sakhalin-1 oil and gas project in Russia’s Far East.

His move affecting Exxon’s largest investment in Russia mimics a strategy he used to seize control of other energy properties in the country.