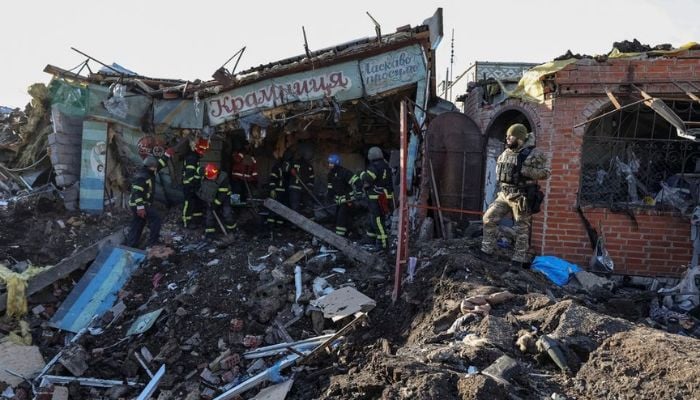 KYIV/SIVERSK: Russia has stepped up a powerful assault on Soledar in eastern Ukraine, officials in Kyiv said, forcing Ukrainian troops to repel waves of attacks led by the Wagner contract militia around the salt mining town and nearby fronts.

Soledar, in the industrial Donbas region, lies a few miles from Bakhmut, where troops from both sides have been taking heavy losses in some of the most intense trench warfare since Russia invaded Ukraine nearly 11 months ago.

“The enemy literally step over the corpses of their own soldiers, using massed artillery, MLRS systems and mortars,” Malyar said.

Russia’s defence ministry did not mention either Soledar or Bakhmut in a regular media briefing on Monday, a day after facing criticism for an apparently false claim of a missile strike on a temporary Ukrainian barracks.

Wagner was founded by Yevgeny Prigozhin, an ally of Russian President Vladimir Putin. Drawing some recruits from Russia’s prisons and known for uncompromising violence, it is active in conflicts in Africa and has taken a prominent role in Russia’s war effort in Ukraine.

Prigozhin has been trying to capture Bakhmut and Soledar for months at the cost of many lives on both sides. He said on Saturday its significance lay in a network of cavernous mining tunnels below the ground, which can hold big groups of people as well as tanks and other war machines.

Ukrainian military analyst Oleh Zhdanov said fighting in Bahkmut and Soledar is “the most intense on the entire frontline”, with little advancement by either side in the freezing conditions.

“So many (pro-Russian fighters) remain on the battlefield … either dead or wounded,” he said on YouTube.

“They attack our positions in waves, but the wounded as a rule die where they lie, either from exposure as it is very cold or from blood loss. No one is coming to help them or to collect the dead from the battlefield.”

Ukrainian President Volodymyr Zelenskiy said in nightly video remarks on Monday that Bakhmut and Soledar were holding on despite widespread destruction.

He cited new and fiercer attacks in Soledar, where he said no walls have been left standing and the land is covered with Russian corpses.

“Thanks to the resilience of our soldiers in Soledar, we have won for Ukraine additional time and additional strength,” Zelenskiy said. He did not spell out what he meant by gaining time or strength.

But Ukrainian officials, led by the commander in chief General Valery Zaluzhniy, have warned that Russia is preparing fresh troops for a new, major offensive on Ukraine, possibly on the capital Kyiv.

On Monday, he pressed on with diplomatic efforts, speaking to Petr Fiala, Prime Minister of the Czech Republic, current chair of the 27-member European Union.

“I am certain that our soldiers at the front will get these weapons and equipment. Very soon,” he said.

The United States has imposed sanctions on companies and people it accused of producing or transferring Iranian drones used by Russia. The White House said last week it is considering ways to target Iran’s production of the unmanned weaponised aircraft through sanctions and export controls.

Military analysts say the strategic military benefit for Russia of capturing Bakhmut and Soledar would be limited.

Taras Berezovets, a Ukrainian journalist, political commentator and officer in the Ukrainian army, said capturing Soledar made little sense, except as a personal victory for Prigozhin, however it would be easier to take than Bakhmut.

A US official has said Prigozhin is eyeing the salt and gypsum from the mines, believed to extend over 100 miles underground and contain auditorium-scale caverns.

Berezovets said Ukrainian troops fighting in Bakhmut and Soledar say attacks come in waves of small groups, no more than 15, with the first wave usually wiped out. The pro-Russian forces retrench and leave white ribbons for the next wave to follow.

“The complexity of fighting in cities like Bakhmut and Soledar is that it is hard to determine who is with you and who is the enemy,” he said.

In an evacuee centre in nearby Kramatorsk, Olha, 60, said she had fled Soledar after moving from apartment to apartment as each was destroyed in tank battles.

“There isn’t one house left intact. Apartments were burning, breaking in half,” said Olha, who gave only her first name.