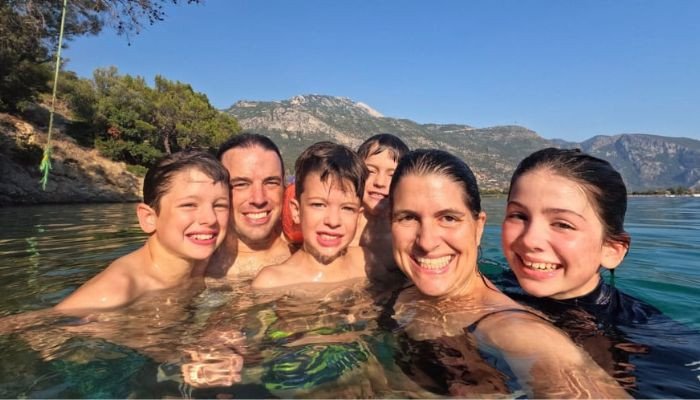 A Canadian couple is taking a world tour before their children go blind due to a rare genetic disorder called retinitis pigmentosa.

Edith Lemay and Sebastien Pelletier first noticed vision issues in their three-year-old daughter Mia years ago, according to a report by CNN.

Years later, Mia was diagnosed with the incurable condition.

The couple, married for 12 years, noticed similar symptoms in their sons and doctors confirmed that two of the three sons, Colin, 7, and Laurent, 5, too had the same disorder.

Leo, who is nine, is their only child who is not suffering from retinitis pigmentosa.

The condition causes loss of vision over time and currently has no cure. By midlife, Lemay explained, they are expected to go completely blind.

Once Lemay and Pelletier finally accepted their children’s fate and came to terms with the news, they decided to focus on what was in their control. The parents shifted their attention to helping the children learn skills they would need in the future.

Mia’s specialist recommended that the parents ingrain her brain with “visual memories”.

Lemay realised that the best way to do that for her children was to pull them out of books and make sure they see things in the real world.

“I thought, I’m not going to show her an elephant in a book, I’m going to take her to see a real elephant,” she said.

Following the thought, the couple decided to plan a year-long world tour with the kids so they can see the world as much as possible.

While travelling with family did not seem feasible to them earlier, the husband said that the diagnosis made it urgent.

The couple started multiplying their savings. Their “gift from life” came when the company that the husband worked for and had shares in was bought.

Originally planned to begin in July 2020 but disrupted due to the pandemic, the trip began in March 2022.

The family of six left Montreal “without an itinerary”, according to Lemay.

The trip began in Namibia where the children got to experience elephants, giraffes and zebras closely. From there they travelled to Zambia and Tanzania, and then to Turkey where they stayed for a month.

Pelletier said that they wanted the kids to see things that they would not be able to see at home.

Most people with retinitis pigmentosa eventually lose most of their sight, according to the National Eye Institute, part of the US National Institutes of Health.

The couple also believes that travelling teaches people to become resilient and cope well, which is something they aim to teach their children through this experience.

Mia, the eldest kid is now 12 and has known about her condition since she was seven. Lemay said that the other younger kids were asking difficult questions like what it was like to be blind.

Lemay hopes that travelling the world will make the children more grateful too.

The duo has 11,000 followers on Facebook and frequently posts about their life.

The family will complete its trip in March 2023 which is when they will go back home to Quebec.