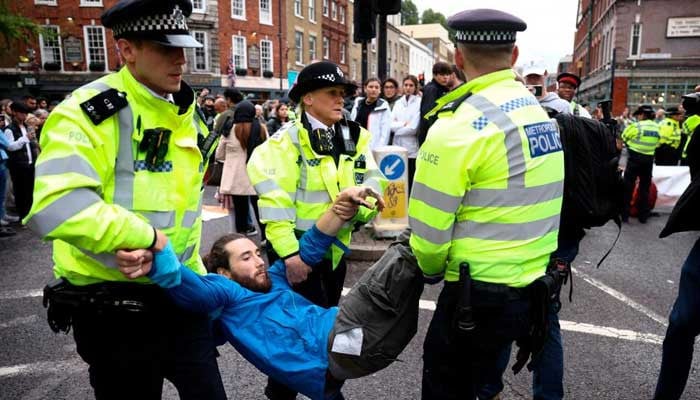 LONDON: Environmental activists on Tuesday tried to breach the gates of Downing Street as part of a high-profile campaign to halt new oil and gas exploration in Britain.

Members of the Just Stop Oil group attempted to climb into the street housing the prime minister’s official residence but were unsuccessful.

Video footage on social media showed police officers dragging protesters away from the entrance, as well as others, in high-visibility orange vests, sitting in the road outside.

In a message on its Twitter account, Just Stop Oil said that 22 supporters “swarmed towards the gates” at 11:15 am (GMT).

“A number of them attempted to scale the gates while others sat down in the road to block the entrance, with some gluing their hands to the tarmac,” it said.

The action came as Prime Minister Rishi Sunak chaired a weekly meeting of his senior ministers at Number 10, and after BP announced a quarterly profit surge due to Russia’s invasion of Ukraine.

Sunak, who succeeded his short-lived predecessor Liz Truss on October 25, has ruled out heading to the UN’s upcoming COP27 climate change conference in Egypt. But he is under pressure to change his mind.

Just Stop Oil also wants him to reverse the government’s policy of granting new oil and gas licences for exploration in the North Sea.

“This genocidal policy will kill millions of people while failing to address the worst cost-of-living crisis this country has ever seen,” it added.

Eight protesters were arrested on Monday after the interior ministry, the Bank of England and the headquarters of the domestic intelligence service MI5 were doused in orange paint.

The London base of Rupert Murdoch’s News Corp media empire was also targeted in what has become an almost daily series of direct action protests by the group over the past month.