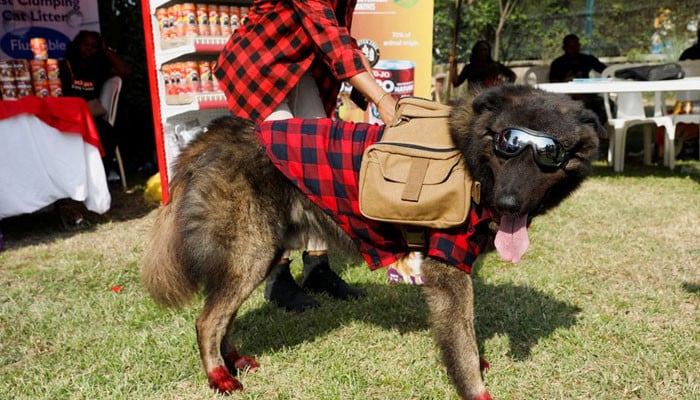 LAGOS: Dog lovers in Nigeria’s commercial capital Lagos were dazzled at a weekend carnival where ‘man’s best friend’ strutted the red carpet in colourful outfits, part of a drive to encourage pet ownership in a country where dogs are often bred for their meat.

Jackie Idimogu, organiser of the Lagos Dog Festival, now in its fourth year, said the show was aimed at debunking stereotypes of Africans mistreating dogs.

“I have been able to make humans understand that dogs are not for guards like they are not just to be kept at the gate or outside the compound,” Idimogu.

“I am happy to say that Nigerians are beginning to understand the love language of these animals.”

American Eskimos, Neapolitans, French bulldogs, a Siberian husky and American Staffordshire terrier, Maltipoo’s, poodle crossbreeds and golden retrievers were some of the dogs that took to the red carpet and won prices.

Pasha, a six-year-old Caucasian shepherd mix, was crowned dog of the year. He wore black sunglasses and a matching red and black scotch outfit with her owner Hadiza Saidu.

“I chose red because it is vibrant, it is royalty, it is majestic just like him,” said Saidu, in line with this year’s theme, “splashes of colours”.

Panda, a black poodle-mix breed, won the “princess in pink” award for her bright outfit and the prize of “green with envy” went to Ela, an American Eskimo dog, for her floral dress.