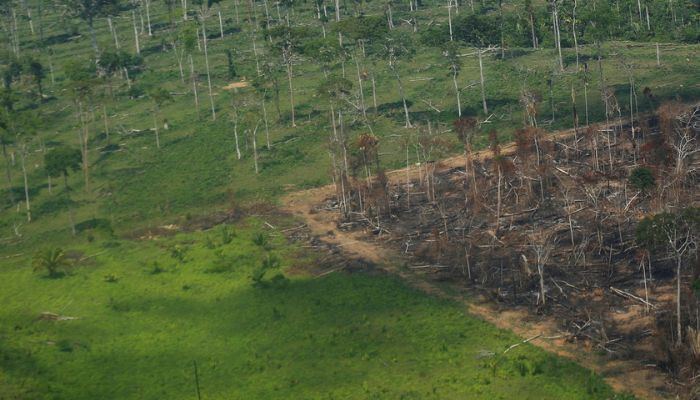 Deforestation in Brazil’s Amazon rainforest affected the largest area for a September since current records began, government data from last month showed on Friday, as fires in the region surged to their highest level in more than a decade.

Satellite data from Brazilian space research agency INPE showed that 1,455 square kilometers (562 square miles) were cleared in the Amazon last month, up 48% from a year ago and beating the September 2019 record in a data series that began in 2015.

Friday’s preliminary figures also pushed deforestation in the region to a record high for the first nine months of the year, according to INPE, with 8,590 square kilometers cleared from January to September, equal to an area 11 times the size of New York City and up 22.6% from last year.

Experts blame the far-right leader, who is currently bidding for re-election, for rolling back environmental protections, opening the way for loggers and ranchers to illegally clear more of the Amazon.

Bolsonaro’s office forwarded a Reuters request for comment to the Justice Ministry, which said it has been conducting a police operation since last year to fight illegal deforestation and forest fires and to protect indigenous lands.

The Environment Ministry did not respond to a request for comment.

The accelerating deforestation had “pretty relevant impacts not only for the biome, but also for the weather and the region’s rainfall regime, as well as economic impacts for those who live in the Amazon and Brazil as a whole,” said Mariana Napolitano, WWF-Brasil’s science manager.

The Amazon’s annual burning season is in August and September, when fires tend to spike as rains subside, allowing ranchers and farmers to set fire to deforested areas.

Last month, INPE fire alerts jumped to the highest level for any month since September 2010.