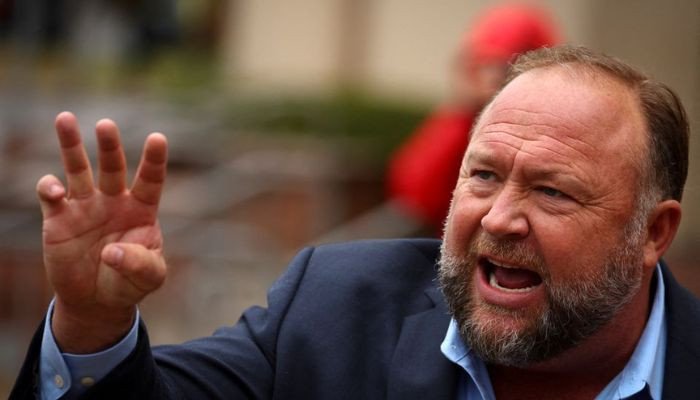 Right-wing conspiracy theorist Alex Jones must pay at least $965 million in damages to numerous families of victims of the 2012 Sandy Hook mass shooting for falsely claiming they were actors who faked the tragedy, a Connecticut jury said on Wednesday.

The verdict, which came after three weeks of testimony in a state court in Waterbury, Connecticut, far outstripped the $49 million Jones was ordered to pay in August by a Texas jury in a similar case brought by two other Sandy Hook parents.

The Connecticut verdict applies to both Jones and his company, Free Speech Systems LLC, the owner of Jones’ Infowars website. FSS filed for bankruptcy in July.

The plaintiffs in the Connecticut case included more than a dozen relatives of 20 children and six staff members who were gunned down at Sandy Hook Elementary School in December 2012. Jones claimed for years that the massacre was staged as part of a government plot to take away Americans’ guns.

Jurors said the plaintiffs should also be awarded attorney’s fees, which are set to be determined in November.

During a live broadcast as the verdict was read, Jones vowed to appeal and said his company’s ongoing bankruptcy will protect Infowars in the meantime.

Jones’ lawyer did not immediately respond to a request for comment.

Christopher Mattei, a lawyer for the families, said outside the courthouse that the verdict was “against Alex Jones, his lies and their poisonous spread, and a verdict for truth and for our common humanity.”

Outside the courthouse, Robbie Parker, one of the plaintiffs in the case, thanked the jury for its verdict. “Everybody who took the stand told the truth,” Parker said. “Except for one. The one who proclaims that that’s what he does. But while the truth was being said in the courtroom, he was standing right here, lying.”

Jones was found liable in a default judgment last year after he failed to comply with court orders.

During closing arguments last week, Mattei said Jones cashed in for years on lies about the shooting, which drove traffic to his Infowars website and boosted sales of its various products.

Infowars’ finances are not public, but according to trial testimony the site brought in revenue of $165 million between 2016 and 2018. An economist in the Texas case estimated that Jones is personally worth between $135 million and $270 million.

FSS’s bankruptcy will limit the total money available to Sandy Hook families, but they could seek other assets from Jones if a judge rules his company deliberately harmed them, according to Brian Kabateck, a plaintiffs’ attorney who was not involved in the case.

“The underlying conduct was egregious, and that’s the kind of thing that could get you beyond the limits of the bankruptcy,” Kabateck told Reuters.

Jones has not personally filed for bankruptcy but the same principle would apply if he does, Kabateck said.

The families suffered a decade-long campaign of harassment and death threats by Jones’ followers, Mattei said.

“Every single one of these families (was) drowning in grief, and Alex Jones put his foot right on top of them,” Mattei told jurors.

Jones’ lawyer countered during closing arguments that the plaintiffs had shown scant evidence of quantifiable losses. The attorney, Norman Pattis, urged jurors to ignore the political undercurrents in the case.

“This is not a case about politics,” Pattis said. “It’s about how much to compensate the plaintiffs.”

Douglas E. Mirell, a lawyer and defamation expert who was not involved in the case, said the sizable verdict sent a clear message of “revulsion” from the jury.

“His refusal to own up to the mendacity and lies that he promulgated time and time again over many years has now caught up with him,” Mirell said of Jones.

The trial was marked by weeks of anguished testimony from the families, who filled the gallery each day and took turns recounting how Jones’ lies about Sandy Hook compounded their grief. An FBI agent who responded to the shooting was also a plaintiff in the case.

Jones, who has since acknowledged that the shooting occurred, also testified and briefly threw the trial into chaos as he railed against his “liberal” critics and refused to apologize to the families.

In August, another jury found that Jones and his company must pay $49.3 million to Sandy Hook parents in a similar case in Austin, Texas, where the headquarters of Jones’ Infowars conspiracy theory website is located.

Jones’ lawyers have said they hope to void most of the payout in the Texas case before it is approved by a judge, calling it excessive under state law.

Connecticut does not place caps on damages, though Jones could appeal the verdict on other legal grounds.

Mattei said the families would go to any court necessary to enforce the verdict “for as long as it takes, because that’s what justice requires.”