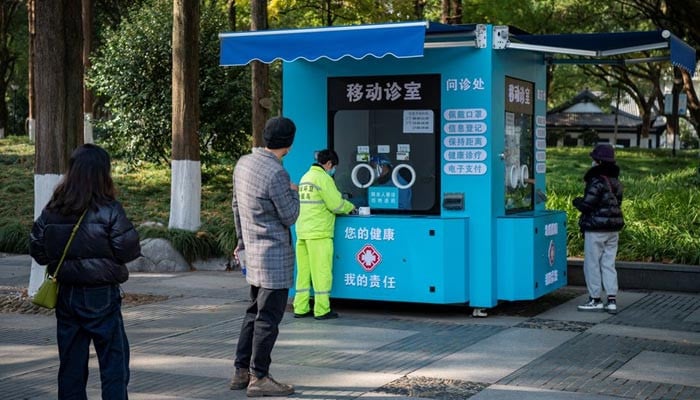 BEIJING/SHANGHAI: China is expecting a peak in COVID-19 infections within a week, a health official said, with authorities predicting extra strain on the country’s health system even as they downplay the disease’s severity and continue to report no new deaths.

In the face of a surging outbreak and widespread protests against its “zero-COVID” regime of lockdowns and testing, China began dismantling it this month, becoming the last major country to move towards living with the virus.

Its containment measures had slowed the economy to its lowest growth rate in nearly half a century, jamming global supply chains and trade. As Chinese workers increasingly fall ill, more disruption is expected in the short term before the economy bounces back later next year.

China reported less than 4,000 new symptomatic local COVID cases nationwide for December 22, and no new COVID deaths for a third consecutive day. Authorities have narrowed the criteria for COVID deaths, prompting criticism from many disease experts.

Zhang Wenhong, director of the National Centre for Infectious Diseases, was quoted in Shanghai government-backed news outlet The Paper on Thursday as saying China “is expected to reach the peak of infections within a week.”

“The peak infection will also increase the rate of severe disease, which will have a certain impact on our entire medical resources,” he said, adding the wave will last another one or two months after that.

“We must be mentally prepared that infection is inevitable.”

Nevertheless, Zhang said he had visited nursing homes around Shanghai, noticing the number of elderly dealing with severe symptoms was low.

Infections in China are likely to be more than a million a day with deaths at more than 5,000 a day, a “stark contrast” from official data, British-based health data firm Airfinity said this week.

A Shanghai hospital has estimated half of the commercial hub’s 25 million people would get infected by the end of next week. Experts say China could face more than a million COVID deaths next year.

More than a dozen global health experts, epidemiologists, residents and political analysts interviewed by Reuters identified the failure to vaccinate the elderly and communicate an exit strategy to the public, as well as excessive focus on eliminating the virus, as causes of the strain on China’s medical infrastructure.

A drive to vaccinate the elderly that began three weeks ago has yet to bear fruit. China’s overall vaccination rate is above 90% but the rate for adults who have had booster shots drops to 57.9%, and to 42.3% for people aged 80 and older, according to government data.

China spent big on quarantine and testing facilities over the past three years rather than bolstering hospitals and clinics and training medical staff, these people said.

“There is an incredible lack of preparation for the virus coming despite them having … ample warning,” said Leong Hoe Nam, an infectious diseases doctor at Rophi Clinic in Singapore.

China’s National Health Commission did not respond to requests for comment on the criticisms.

The country has nine domestically developed COVID shots approved for use, all seen as less effective than Western-made vaccines that use the new mRNA technology.

A shipment of 11,500 BioNTech mRNA vaccines for German nationals in China have arrived at the German embassy in Beijing, an embassy spokesperson told Reuters on Friday.

The embassy hopes the first doses will be given out “as soon as possible”, the spokesperson said.

The World Health Organisation has received no data from China on new COVID hospitalisations since Beijing lifted its zero-COVID policy. The WHO has said gaps in data might be due to Chinese authorities simply struggling to tally cases.

Amid mounting doubts about Beijing’s statistics, US Secretary of State Antony Blinken on Thursday said all countries, including China, need to share information on their experiences with COVID.

As COVID rages through China, residents who previously faced long periods of isolation are now learning to live with the virus.

Chinese teacher Yang Zengdong, whose whole family is isolating in their downtown Shanghai apartment, mildly ill with COVID, welcomes the change in policy. Only weeks ago, they would have all been sent to a quarantine facility, and their building would have been locked down.

“When I think of this situation my feeling is just, wow, we are so lucky because now we can isolate at home,” Yang said.

“This wave is something we have to face, because it is impossible to stay closed forever.”