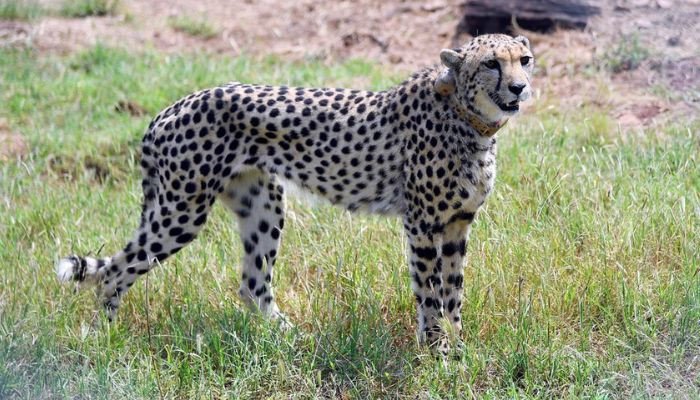 Eight radio-collared African cheetahs step out onto the grassland of Kuno National Park in central India, their final destination after a 5,000-mile (8,000 km) journey from Namibia that has drawn criticism from some conservationists.

The arrival of the big cats — the fastest land animal on Earth — coincides with the 72nd birthday of Indian Prime Minister Narendra Modi, who released the first cat into the park on Saturday. It is the culmination of a 13-year effort to restore a species which vanished from India some 70 years ago.

The high-profile project is the first time wild cheetahs have been moved across continents to be released. It has raised questions from scientists who say the government should do more to protect the country’s own struggling wildlife.

The cheetahs — five females and three males — arrived after a two-day airplane and helicopter journey from the African savannah, and are expected to spend two to three months in a 6-square-km (2-square-mile) enclosure inside the park in the central Indian state of Madhya Pradesh.

If all goes well with their acclimation to Kuno, the cats will be released to run through 5,000 square km (2,000 square miles) of forest and grassland, sharing the landscape with leopards, sloth bears and striped hyenas.

Another 12 cheetahs are expected to join the fledgling Indian population next month from South Africa. And as India gathers more funding for the 910 million rupee ($11.4 million) project, largely financed by the state-owned Indian Oil, it hopes to eventually grow the population to around 40 cats.

SP Yadav of the National Tiger Conservation Authority said the extinction of the cheetah in India in 1952 was the only time the country had lost a large mammal species since independence.

“It is our moral and ethical responsibility to bring it back.”

But some Indian conservation experts called the effort a “vanity project” that ignores the fact that the African cheetah — a subspecies similar but separate from the critically endangered Asiatic cheetah now only found in Iran — is not native to the Indian subcontinent.

And with India’s 1.4 billion human population jockeying for land, biologists worry cheetahs won’t have enough space to roam without being killed by predators or people.

India last year joined a UN pledge to conserve 30% of its land and ocean area by 2030, but today less than 6% of the country’s territory is protected.

Bringing back the cheetah “is our endeavour towards environment and wildlife conservation,” Modi said.

While cheetahs today are most often associated with Africa, the word “cheetah” comes from the Sanskrit word “chitraka”, meaning “the spotted one”.

At one point, the Asiatic cheetah ranged widely across North Africa, the Middle East and throughout India. During the Mughal Empire era, tamed cheetahs served as royal hunting companions, coursing after prey on behalf of their masters.

But hunters later turned their weapons on the cheetah itself. Today, just 12 remain in the arid regions of Iran.

India’s successes in managing the world’s largest population of wild tigers proves it has the credentials to bring cheetahs back, said Yadav.

However, even between African countries, “there have been few (relocations) for cheetah into large or unfenced areas that have been successful,” said Kim Young-Overton, cheetah program director at Panthera, a global wild cat conservation organization.

To set the cheetahs up for success, authorities are relocating villagers from Bagcha near Kuno. Officials have also been vaccinating domestic dogs in the area against diseases that could spread to the cats.

Indian Oil has pledged more than 500 million rupees ($6.3 million) for the project over the next five years.

Some Indian scientists say modern India presents challenges not faced by the animals in the past.

Once the cheetahs move beyond Kuno’s unfenced boundaries, “they’ll be knocked out within six months by domestic dogs, by leopards,” said wildlife biologist Ullas Karanth, director of the Centre for Wildlife Studies in Bengaluru.

“Or they’ll kill a goat, and villagers will poison them” in response.

Poaching fears stymied another project that involved a 2013 Supreme Court order to move some of the world’s last surviving Asiatic lions from their only reserve in the western Indian state of Gujarat to Kuno. Now, the cheetahs will take over that space.

“Cheetahs cannot be India’s burden,” said wildlife biologist Ravi Chellam, a scientific authority on Asiatic lions. “These are African animals found in dozens of locations. The Asiatic lion is a single population. A simple eyeballing of the situation shows which species has to be the priority.”

Other conservation experts say the promise of restoring cheetahs to India is worth the challenges.

“Cheetahs play an important role in grassland ecosystems,” herding prey through grasslands and preventing overgrazing, said conservation biologist Laurie Marker, founder of the Cheetah Conservation Fund leading the Namibian side of the project.

Marker and her collaborators will help monitor the cats’ settlement, hunting and reproduction in coming years.

Modi called for people to be patient as the cats adjust. “For them to be able to make Kuno National Park their home, we’ll have to give these Cheetahs a few months’ time.”