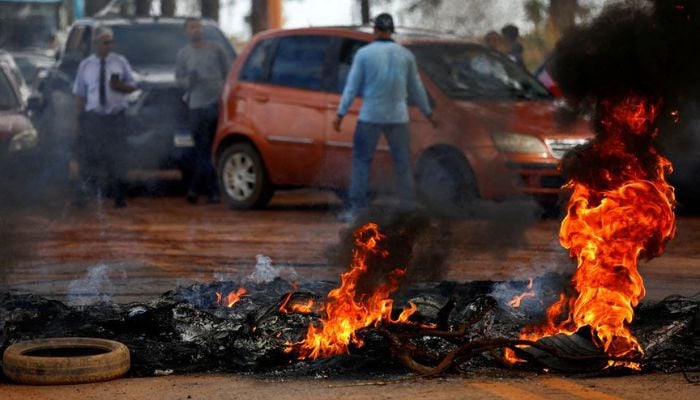 SAO PAULO: Brazilian President Jair Bolsonaro for the first time on Wednesday asked protesters blocking roads nationwide to lift blockades as demonstrations are restricting people’s right to come and go and bringing losses to the economy.

In a video posted on social media, Bolsonaro said he understood people’s frustration at the result of the election.

“I know you are upset… Me too. But we have to keep our heads straight,” he said on a tweeted message. “I will make an appeal to you: clear the highways.”

The president said blocking roads make the ongoing protests illegitimate. He encouraged people to choose other ways to demonstrate.

Bolsonaro added the Federal Highway Police (PRF) had mobilized to help dispel protesters and clear roads. But he said they are overwhelmed because protests are taking place on multiple locations. “The difficulties are enormous.”

Brazilian authorities said they were making headway in their efforts to clear blockades set up across the country by truckers.

The PRF said protesters were blocking highways partially or fully in 126 locations as of Wednesday evening, down from around 190 the previous night.

Although smaller than in previous days, the protests are still likely disrupting fuel distribution, industrial activity, food deliveries to supermarkets and shipments of grains to ports.

Anvisa, the national health agency, warned that the blockades could lead to shortages of medical supplies.

Abear, a trade group which represents Brazilian airlines, warned that the jet fuel supplies may be compromised.

Police said 732 roadblocks had been cleared across the country, though roads remained blocked or partially blocked in 14 of Brazil’s 26 states, most notably in farm states like Santa Catarina and Mato Grosso, where Bolsonaro has strong popular support.

In remarks on Tuesday, the Brazilian president said the protests resulted from “indignation and a sense of injustice” over the vote. But he had stopped short of explicitly asking his supporters to take down the blockades.

Truckers, a key Bolsonaro constituency that benefited from his policies to lower fuel prices, have disrupted the Brazilian economy by shutting highways in recent years.

Some of the protesters have called for military intervention to keep Bolsonaro in power.