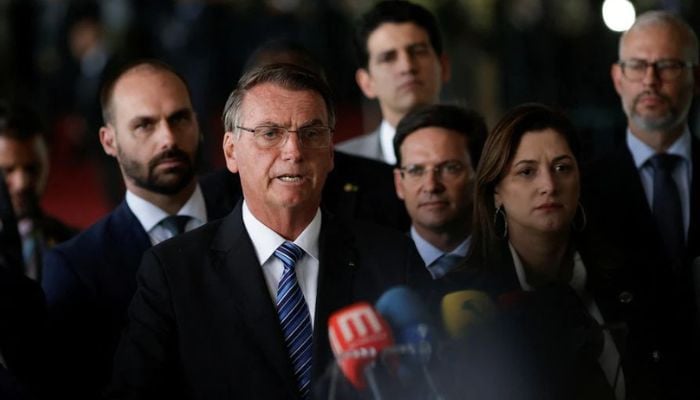 Brazilian President Jair Bolsonaro on Tuesday did not concede defeat in his first public remarks since losing Sunday’s election, saying protests by his supporters were the fruit of “indignation and a sense of injustice” over the vote.

However, he stopped short of contesting the election result and authorized his chief of staff, Ciro Nogueira, to begin the transition process with representatives of leftist President-elect Luiz Inacio Lula da Silva.

It took Bolsonaro, a right-wing nationalist, more than 44 hours to comment after the election was decided by electoral authorities, with the delay raising fears he would seek to cast doubt on the narrow result.

Amid his silence, supporters blocked highways to protest his defeat, with some calling for a military coup to stop former president Lula from returning to power.

The highway blockades have disrupted fuel distribution, supermarket supplies, and the flow of grains exports to major ports, according to industry groups.

In his brief national address, Bolsonaro joked that journalists would miss him, thanked those who voted for him and said he would abide by the constitution, which stipulates a transition of power on Jan. 1.

“The current popular movements are the fruit of indignation and a sense of injustice about the way the electoral process took place,” he said.

He said protesters should avoid destroying property or “impeding the right to come and go,” but did not tell them to return home.

“Bolsonaro has not put out this fire. He spoke to his hardcore supporters without criticizing the demonstrators on the highways,” said political risk analyst Andre Cesar at Hold Legislative Advisors in Brasilia. “He is keeping his more extremist followers mobilized.”

Karina Laurinda, 34, who took part in highway demonstrations outside of Sao Paulo, said she would keep protesting.

“Even if he says to calm down, not to react, we’re still going to react because we won’t accept a Lula government,” she said.

Bolsonaro’s chief of staff and Vice President Hamilton Mourao have begun to make contact with the Lula camp to discuss a transition. Other allies, including the speaker of the lower house of Congress, have called since Sunday for the Bolsonaro government to respect the election result.

In a statement, the Supreme Court said it considered that, by authorizing the government transition, Bolsonaro was recognizing the result of the election.

During a meeting later on Tuesday between Bolsonaro and several Supreme Court justices, the president acknowledged clearly that Lula had won the election, according to two of the justices who took part.

“It cleared the air, without a doubt. It seemed to turn the page,” said one of the judges, who requested anonymity to discuss the meeting frankly.

“The message was: game over,” said the other judge. “He didn’t criticize the electoral system or the courts.”

Before Sunday’s vote, Bolsonaro repeatedly made baseless claims that the electoral system was open to fraud and accused electoral authorities of favouring his leftist adversary.

Bolsonaro did not directly repeat those claims on Tuesday. But his reference to “injustice” in the electoral process showed he had learned from the post-presidency of US President Donald Trump, his ideological ally, according to Leonardo Barreto, political analyst at Vector Consultancy in Brasilia.

Trump has continued to repeat false claims that the 2020 US election was “stolen” by widespread fraud and retains a significant core of supporters who believe them.

“He is going to copy Trump for the next four years to keep his conservative movement alive,” said Barreto, forecasting that the 2026 election would be a rematch between Bolsonaro and Lula’s Workers Party.

Lula’s victory represents a stunning comeback for the 77-year-old former metalworker, who spent 19 months in jail for corruption convictions before they were annulled last year.

Lula has vowed to overturn many of Bolsonaro’s policies, including pro-gun measures and weak protection of the Amazon rainforest. His aides confirmed on Tuesday that he would attend this month’s COP27 United Nations climate summit in Egypt.

Nogueira, Bolsonaro’s chief of staff, told journalists that the president had authorized him to begin the transition process with Alckmin once his name is formally submitted on Thursday.